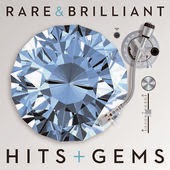 I'd disagree with the title; these tracks aren't rare, and only a couple approach brilliance, but that's marketing.  It's a collection of cuts from the late '70's to the '90's, all pop hits or well-known cuts that had an edge to them, at least for the time.  In other words, a pretty good mix tape, with cuts with similarities.

Pretty good only, because there are a couple of tracks that push the annoying button, especially Maniac by Michael Sembello, Extreme's More Than Words and Closing Time by Semisonic.  I know you have to have some big hits in the mix, but nobody needs to hear those again for at least another generation.  There probably is a new generation now that needs to be introduced to many of the other tracks though, such as Video Killed The Radio Star, Walking On Sunshine and Funkytown.  Enjoy, young folks, welcome to my early 20's.  There are even some lesser-known cuts included, obviously by folks who remember when radio could still be fun AND good.  So hats off for delivering Wall Of Voodoo's Mexican Radio and The Future's So Bright, I Gotta Wear Shades.  The New Radicals' You Get What You Give and Joan Osborne's One Of Us show up on a few too many compilations, but they are still worthy cuts.  And no matter how many times I hear it, I never tire of Concrete Blonde's Joey.  I guess we're in the '90's Revival now.
Posted by Bob Mersereau at 9:43 AM