MUSIC REVIEW OF THE DAY: THE HAPPENINGS - THE VERY BEST OF 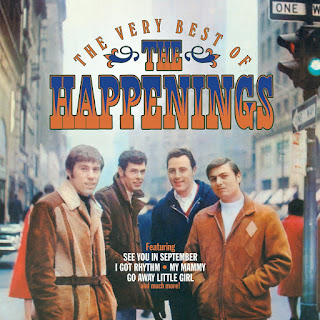 A largely forgotten vocal group from New Jersey in the mid-to-late-60s, The Happenings scored four Top 20 hits, plus several more charting ones before their sound plummeted out of style. Discovered and produced by fellow vocal group The Tokens, they had a mix of The Lettermen and Four Seasons, old barbershop harmonies and big production, they specialized in new pop arrangements for old, familiar tunes. The group's breakthrough, See You In September, had been a minor 50s cut but a #3 smash for them. They followed that with an update of Steve Lawrence's Go Away Little Girl, landing another hit.


And so the formula was set, with the only change coming when the group went even further back for source material. Covering the Gershwin's I Got Rhythm proved a novelty hit, and then they even went to the Al Jolson catalog, with My Mammy. But they went back to that well too many times, and the old Theresa Brewer number Music Music Music barely cracked the Top 100, despite a Beach Boys-styled harmony opening.


The last gasp for the group came in 1969, when their label tried to drag them into the peace and love generation, getting them to cover a song from the hit musical Hair, Where Do I Go/Be-In/Hare Krishna. Nothing doing, these Jersey boys were too white bread and old-school to pull off that transition. Fans of sunshine pop may find enough joy here, and it's certainly the most comprehensive and well-packaged collection of the band out there, with every one of their chart entries included among the 16 cuts.
Posted by Bob Mersereau at 9:23 PM