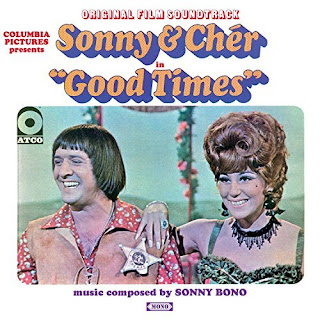 Well, who knew that William Friedkin made an even scarier movie than The Exorcist? Back in 1967, the future top Hollywood film director had only done documentaries and TV shows, until he was approached by none other than Sonny and Cher, then two of the hottest stars around. Like The Beatles and Elvis, they wanted to expand their audience by moving to movies, and the team concocted a comedy based on the duo's wacky personae.


Sound familiar? Yes, it was a trial run for what the couple would do on their hit TV show several years later, and as a series of vignettes, it was not far off the whole MTV concept either. The trouble was, is also stunk a whole lot. Not that man people saw it then, or have seen it since. Between the time they started it, and the time it was released, the pair's fortunes had plummeted in the fast-moving pop world, and it would be four years before they would surprisingly reappear.


What was pretty good was the interesting soundtrack album. Sonny composed a group of songs to go with each vignette in the movie, including the decent, although minor hit, It's The Little Things. Since they played a version of themselves in the film, he reprised their big hit, I Got You Babe, but in two new versions, one a take with an orchestra and children's choir, and the other, a cool acoustic version. There were only eight cuts on the original, but they certainly showed how much Sonny had learned working closely with Phil Spector, and that he had come into his own as a producer.


To bulk up the CD for reissue, it now includes three extra cuts: The original, hit version of I Got You Babe, the single Plastic Man from the same time period, and the single edit of It's The Little Things, of the best non-hits by the pair. This is a good one for 60s pop fans and history buffs.
Posted by Bob Mersereau at 9:54 PM