MUSIC REVIEW OF THE DAY: NATHANIEL RATELIFF & THE NIGHT SWEATS - A LITTLE SOMETHING MORE FROM ... 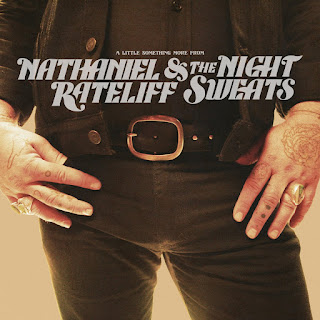 Here's a nifty little bonus disc from the recent breakout soul star. It's an eight-cut, half-hour long set of b-sides and bonus cuts from the Stax Records artist, following his label debut in 2015, which went gold in the U.S. and platinum in Canada. It's no mere jumble of leftovers though. Aside from one live cut (Wasting Time from the proper album, recorded at the Stax Museum in Memphis), the rest are solid studio cuts that easily could have fit on the album, or even made a good start on the next one.


For the most part, these are horn-fired, Southern-flavoured soul numbers, with a good bit of boogie in there as well. But Rateliff's folk past does pop up on the track Just To Talk To You, an acoustic slide guitar number. How To Make Friends, is more of a rock number, a laid-back groove with a George Harrison/All Things Must Pass vibe. I can see how these somewhat out-of-character cuts might not feel right for album cuts, but they certainly add to the appreciation of his skills. It's a good little stop-gap set while we wait to see what 2017 brings.
Posted by Bob Mersereau at 9:14 PM