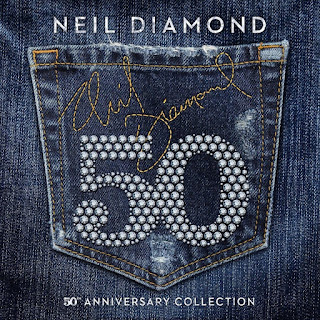 The question here is not whether the music is good, but where it comes from and what is included.  I think we all know where we stand on Diamond, and and even on certain periods of his career.  I, for instance, love the '60s stuff ("Solitary Man," "Kentucky Woman," "Sweet Caroline"), tread carefully through the '70s ("Cracklin' Rosie," "Song Sung Blue," "Longfellow Serenade"), and am very, very careful from "You Don't Bring Me Flowers" on.  On this three-disc set celebrating 50 years, that's pretty much how it's laid out, one CD on each of those periods, 50 songs in total.

In the past, Diamond collections have been hampered by rights issues.  Since he recorded for several companies, from Bang to UNI to MCA to Columbia to Capitol, you'd get the frustrating situation where a set such as The Essential Neil Diamond from 2001 would have several live cuts, in that case featuring concert records of the UNI tracks including "Play Me" and "Brother Love's Travelling Salvation Show."  Others, like the confusingly titled Neil Diamond Collection, would be just the 1968-1972 UNI era.  Well, finally, this set seems to have covered all the bases, and very well.  Almost every hit song is here, and the ones that aren't are from later, dodgy years, only enough to create a minor squabble among completists.  There are a handful of important album cuts thrown in, including "Crunchy Granola Suite" and his versions of "I'm A Believer" and "Red Red Wine", much bigger hits for others.  There are even minor hits that have rarely shown up on collections or reissues, such as the 1968 fizzle "Sunday Sun", quite a good song that tanked at #68 on release.

Disc three does get shaky, but not as dire as it could be, as the set races through the late '70s to today.  I always felt that the cheese and bluster was hard to take in those years, with "America" from The Jazz Singer and Vegas material like "Heartlight". Like so many others, Diamond enlisted Rick Rubin in the new century to give him the Johnny Cash makeover, without as much success, but the three tracks from those albums do bring him back down to Earth at least.  Still, it's disc one that will get my repeat play.
Posted by Bob Mersereau at 5:37 PM