MUSIC REVIEW OF THE DAY: SHERYL CROW - BE MYSELF 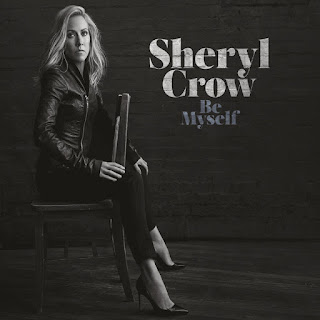 I guess I can't fault Crow too much for making a country album last time out in 2013. She's lived in Nashville for several years, so when in Rome...and, she is from Missouri. Plus, I'm sure she was told by pretty much everybody that the only way to sell actual albums was to do standards, Christmas carols or go country. She quickly found out that it also involved selling your soul to the devil, or in this case, country radio programmers, and that experiment is over.


When you look at it, what do we know her for? Big pop-rock hits with catchy chorus, and a bit of ironic wit. She did have a fine streak of those hits from 1993 to 2005, starting with Tuesday Night Music Club and including later smashes such as "Soak Up The Sun" and "My Favorite Mistake." The thinking is a return to those days, and she's brought in a couple of the collaborators from those times, including sound-shaping engineer Tchad Blake, and co-producer and co-writer Jeff Trott. Those aren't the Tuesday Night Music Club people, but the ones from the next couple of albums, the folks that helped with "If It Makes You Happy," "Everyday Is A Winding Road," etc.


And I'm all for it. I think she's always done well with those smart rockers, she knows how to make them groove, and it's fun stuff. She'll throw in a ballad to break things up every few songs, but the core stuff here is songs made of wry observations that you can dance to. Now, she's added a little maturity to the mix too, stuck between still feeling young, but not quite connecting with that age group: "Hangin' with the hipsters/is a lot of hard work/How many selfies can you take/before you look like a jerk." Crow has a few things to point out about cellphones and self-absorption, and in general is getting a little cranky about young people and the Age of Kardashian. I like that too. We need more cranky parents.
Posted by Bob Mersereau at 8:54 PM