MUSIC REVIEW OF THE DAY: GUARDIANS OF THE GALAXY VOL.2 - AWESOME MIX VOL. 2 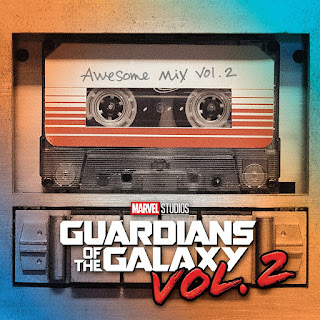 The first Guardians of the Galaxy film had a terrific soundtrack, used to great effect in the movie, sold a bunch, and it certainly helped spur interest. So the pressure was on to repeat the magic for the sequel. Kudos, oh music supervisors, you have done it again.


Once again the 1970's provide the tunes, most of them well-known to those of that era (ahem) but probably brand new to the film's core audience of millennials. The most famous cuts are George Harrison's "My Sweet Lord", but it's rarely heard on such collections, no doubt very pricey, and Fleetwood Mac's "The Chain", not one of their overplayed numbers so a good choice. The focus cut on the previews has been Sweet's "Fox On The Run", which retains its silly charms. Pop frivolity abounds with ELO's "Mr. Blue Sky", the Looking Glass' chestnut "Brandy", and Cheap Trick's cheesy "Surrender".


There's a killer cult hit, the 1971 number "Lake Shore Drive" by Chicago band Aliotta Haynes Jeremiah, long rumoured but denied to be about LSD. Silver's bubblegum number "Wham Bam Shang-a-Lang" is another surprise, and a better cut than the title suggests. Missteps are few here, but I'd quibble about using Glen Campbell's "Southern Nights", there are better songs around, and Sam Cooke's "Bring It On Home To Me" is out of the time period so out of place. But as advertised, this is another awesome mix.
Posted by Bob Mersereau at 9:40 PM