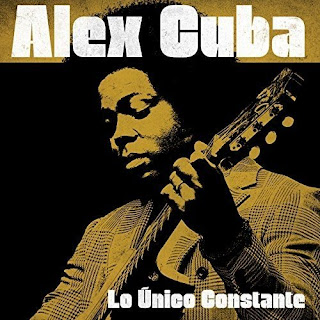 On the surface, the pairing of veteran Cuban musician Alex Cuba and relative newcomer, soul/R'n'B singer Reeny Smith, seems an unlikely mix. But the two performers, who share the bill for a Saturday evening show at this year's Harvest Jazz and Blues Festival in Fredericton, turn out to be an inspired double-bill. What they share is a belief in positive, life-affirming music.

Smith, from Halifax, opens the show, and while it's not her first time at the festival, it's her first star billing. Last year, she joined her friend David Myles for backing vocals, something she's also done for his brand-new album out this week. But this time, she's back with her full band, and Fredericton will finally get to hear what Nova Scotia crowds have been raving about for a few years now.
Although still described as an emerging artist at 24, Smith has been performing since she was five, including the choirs of her family's church, Saint Thomas Baptist in North Preston, N.S. Both her father and grandfather, Wallace Jr. and Sr., were members of the famed Gospel Heirs, and her father now directs the Hallelujah Praise Choir. If that's not enough, blues fans will know her uncles Carson and Murray of the Carson Downey Band.

Her own career took off in 2011, when she started winning awards and scholarships in the province. By 2014, she started performing major concerts such as the Halifax Jazz Festival, and Canada Day and Natal Day public shows.
She's now recognized as an extraordinary vocalist, and has just begun releasing her own singles, including the brand-new East Coast hit, Survive. A new E.P. is planned for later this fall.

For Smith, it all goes back to those choir shows she has spent her life doing, making sure the audience feels energized.

"Just try to have people talking about it afterwards and wanting more," she says. "We put together a show that's upbeat, and there's also some very strong ballads that we do. Overall it's such a great, musical show. I think that's the biggest thing that's missing from the industry right now, the musicality has just gone out the window. We want to play real songs, real music and give people what they paid for."

Alex Cuba may be a veteran, but he still has the same hopes for his audience. The Northern B.C.-based singer and guitar player is making his debut at Harvest this year, and comes with a truck-load of accolades. He has a couple of Junos, a Latin Grammy, and two Grammy nominations, plus a brand-new album, Lo Unico Constante. It was love that brought him to Canada in 1999, and on this new album, he returns to his roots, with songs influenced by the singer-songwriters of Cuba that he listened to growing up.

Cuba's songs have several direct messages in the Spanish lyrics, including advice to take it slow, know yourself, don't keep making the same mistakes. But the advice is aimed at himself, not the listener. "I think it's the most powerful way to communicate, when we put ourselves on the line," he explains. "You never want to come across giving people orders for free, nobody asked you. So the best way is to always talk about yourself, and chances are somebody will see themselves in it."

The songs on the new album are largely acoustic, with that rich rhythm and percussion behind. You don't have to speak the language to pick up on his affirmative lyrics. "I see music as the biggest, most precious gift we got from God or whoever we attribute these powers, so therefore why not use that gift to keep spreading love," says Cuba. "Music for me is sacred, very positive."

Cuba is bringing his three-piece band with him, comprised of bass, drums and a percussionist. He calls it his best group ever, as for the first time he's been able to work with all Cuban players, but ones like him, who all have a knowledge of North American sounds too. "When I want to funk, we can funk, when I want to rock, we can do that too."

Reeny Smith and Alex Cuba will be at the Fredericton Playhouse on Saturday, Sept. 16 starting at 7:30 p.m.
Posted by Bob Mersereau at 10:23 PM