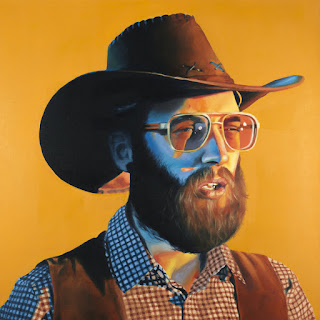 One of the great moments of the most recent East Coast Music Awards in Saint John, N.B., was getting to see the hot new name in Acadian music. Singing and talking to the audience in Chiac, and playing the hybrid style of old country music that has long been a favourite in the region, Menoncle Jason does the whole act. Yes, his tongue is in his cheek with songs about setting bear traps, spending the weekend roofing, and complaining viciously about the size of the power bill, but there's a lot of love there too. This is kind of like joking about your country cousins, but acknowledging you're closely related, get along great and will probably be spending the weekend with them.

The good news is that the album is now available on vinyl, and what a fantastic job they've done with it. Visuals are a big part of the Menoncle Jason experience, and here it goes a lot further than the fantastic cover shot that is now famous in Quebec as well as his home province. It's a grand gatefold cover, with the inside a shot of his desk, covered with a half-eaten burger and fries, empty beer cans, unpaid power bills (from the fictitious Shitty Power}, electrical tape, a deck of cards for poker, and a video cassette with a home-taped episode of Little House on the Prairie. The inner sleeve has several snapshots of Jason and the gang at the local tavern, playing pool and darts, drinking pitchers, then some more doing some repairs and drinking beer, then out in the garage, drinking beer.

The other half of the gatefold sleeve holds the real surprise and crowning piece of the experience. It's a guitar tab book, the complete songs, lyrics, melodies and chords of all his tunes. You too can learn Bear Traps, Dear Deer, Viande de moose and Bill de hydro. There's also a story on the back about him getting in trouble with his neighbours who phone the cops on him over a patch of homegrown in his yard, and his lawnmower is involved, and anyway, "Ouaille ça ç'était des good times," he tells us. Yup, it's all good times.
Posted by Bob Mersereau at 9:32 PM