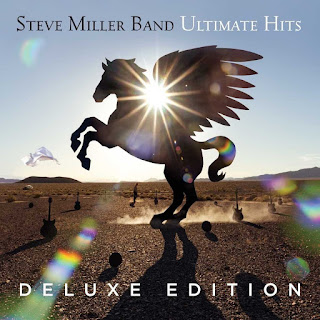 Miller has always been an outsider in the music world, never quite fitting in with whatever scene he was working in. An early blues guy, he could have been hanging with players such as Mike Bloomfield and Paul Butterfield, but instead he and buddy Boz Scaggs ended up in San Francisco when the Airplane and the Dead ruled. Despite some hits, he dropped off the radar until The Joker made him an unlikely Top 40 star. Liking that, he squirreled away from a couple of years to craft a set of ridiculously catchy pop-rock hits that ruled the charts from the albums Fly Like An Eagle and Book of Dreams. But Miller didn't have the star power to sustain that huge stature, and he drifted off in the '80's, returning to blues when he felt, popping up just enough to avoid the Where Are They Now category.

He's still a staple of classic rock, so every few years another best-of pops up, and this is one of the most comprehensive, two discs and 40 tracks. That's where the actual breadth of Miller's career becomes obvious. There are lots of tracks from the big two 70's albums, including the hits Take The Money And Run, Jungle Love, Jet Airliner, Rock 'n Me and Fly Like An Eagle, they are also supported by much-loved album cuts like Dance, Dance, Dance and Wild Mountain Honey. There's also an excellent, previously unreleased demo version of Take The Money And Run that shows the painstaking work Miller did crafting those two albums.

If that's all you know about Miller, there will be lots of surprises. It starts with a previously released, but not very well-known piece of tape, made when Miller was five. It features him singing for his godfather, the one and only Les Paul, who says Miller is a talent already. If it was another, higher profile rock star, this would be a legendary story, but it's barely known even by fans of the faceless Mlller. The list of tracks from his early days is impressive, including Living In The U.S.A., Space Cowboy, Gangster of Love and Kow Kow Calculator. For several of the songs of this era, Miller uses recent live versions instead. Although I'd rather have all originals, these tapes have been glossed up so much, they really do mirror the regular studio takes.

The post-Abracadabra era is rushed through in just six tracks, a bit of a slight really, and the near-hits Ya-Ya and Wide River are ignored, but certainly most of the highlights are covered. Even if you have a single CD of Miller hits, there's probably enough different here to beef up your collection.
Posted by Bob Mersereau at 10:56 PM