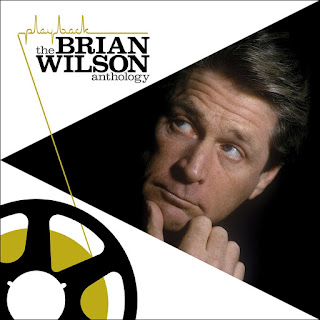 Wilson's comeback as a performer since the 1980's has been nothing short of a miracle, as well documented in the movie Love and Mercy. Now, as he tours his masterpiece 1966 Beach Boys album Pet Sounds, comes a first-ever career compilation of his solo years. Unlike his Beach Boys output, it's not hit-filled, so it's more of a primer from the dozen albums he's released under his own name.

Although the scripted version of his life has him getting healthy again after being saved from the clutches of therapist/leech Dr. Eugene Landy, his initial solo album actually came out when they were still a team, 1988's Brian Wilson. A full four cuts from that are featured here, including his best-known solo track and theme song, Love and Mercy. Finally free of Landy, his next proper studio album was 1998's Imagination, another solid set represented here by the lovely Lay Down Burdon and Cry, but oddly not the excellent single Your Imagination. Gettin' In Over My Head came out in 2004, a raid on the dozens of songs Wilson had sitting in storage waiting for release, including the fun title cut.

The real shock of his rebirth was the willingness to tackle his famously unreleased masterwork, Smile, the unfinished 1966 Beach Boys album that had become a legend, supposedly lost. In 2004, Wilson first performed, then recorded the songs with his amazing road band, finishing the work, which eventually led to the original Beach Boys tracks coming out as well. His own versions of now-classic tracks such as Surf's Up and Heroes and Villains, found here, were what fans thought they'd never hear, and a lifetime of faint hopes were fulfilled for many.

Other, later studio albums are sampled, but quality varies, mostly in finding memorable tunes to compare to Wilson's legacy material. Really it was his return to touring that satisfied most fans, and here two cuts from his Live at the Roxy Theatre are included. But instead of the more obscure and wonderful deep Beach Boys cuts that he performs regularly, here we get two middling "new" songs that were included on that album, This Isn't Love and The First Time, which didn't need to be recycled. They lost the chance to feature something like 'Til I Die or This Whole World. And since he's touring Pet Sounds this year, why not sample something off his Pet Sounds Live album?

At the same time, long-time fans are treated to two previously unreleased cuts from his massive vaults. Some Sweet Day goes way back to early '90's sessions, a welcome tune, but the big winner is Run James Run, which has an old rock and roll feel and makes this a must-own for Brian followers. Given that there are dozens of such unreleased tracks he's made over these decades, this probably won't be the only anthology volume.
Posted by Bob Mersereau at 8:55 PM