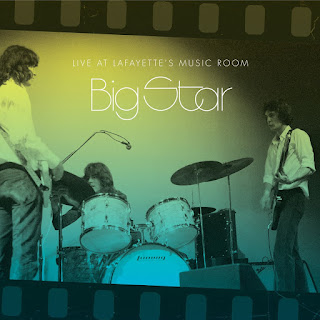 It's not the best recording by a long shot, and it's not even the best performance even, with the three-man lineup barely able to keep up with the demands of the glorious material. It is an important document of this hugely influential band however, showing even more sides to the vision and richness of the group that set the template for alternative rock. And like the group's entire career, the flaws are part of the richness. It's amazing what the three of them could do in a live setting, and how close it really was to perfection.

It was a 1973 gig the band had to do, thanks to a contract, but they were barely functioning at the time. Their debut, #1 Record, had flopped, and Chris Bell, the founder of the band, had quit. Alex Chilton, Jody Stephens and Andy Hummel showed up well-rehearsed though, pros at least, to open for Archie Bell and the Drells, with the crowd caring less about their music. But that didn't stop them from giving all they could.

Without Bell, Chilton somehow manages to fill all the guitar roles, with some fine lead lines and chopping Beatles Rubber Soul chords. They somehow manage to approximate the complex studio work on songs such as "In The Street" and "When My Baby's Beside Me", including many of the tight harmonies. And even new material such as "Back of a Car" gets introduced, months before being recorded, and a year before it's release. There's a lovely four-song mini-set in the middle of acoustic material, include the tender "Thirteen" that is as strong as the record, but the mics also pick up the indifferent crowd chatting away during the songs at one point. At the end of another, there's virtually no applause.

To fill out the hour, the group does some fun covers, including The Flying Burrito Brothers' "Hot Burrito #2", the T. Rex cut "Baby Strange", and Todd Rundgren's "Slut". The whole show has been released before, but it was on the 2009 box set Keep An Eye On The Sky, so this is stand-alone release lets you grab it if you don't have that. For completists, it comes with something new, a download code of an interview with Chilton and Hummel from 1972.
Posted by Bob Mersereau at 8:17 PM