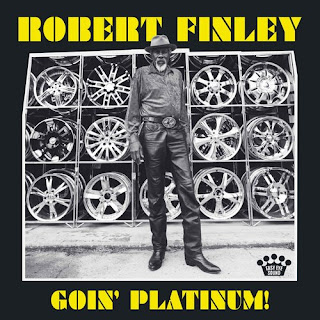 Welcome to 2018, and I'll start off with an artist I'm excited to hear more from. Finley's a 64-year old former carpenter and army vet from Louisiana who has been making music gospel and blues music all his life. In 2015 he was discovered playing on the street by Music Maker, a non-profit that helps aging blues musicians. Help him they certainly did. 2016 saw a debut album, Age Don't Mean A Thing, that caught lots of attention, including that of The Black Keys' Dan Auerbach. Now Auerbach has produced this second, magical album, and is releasing it through his label.

Finley has a tremendous, evocative voice, full of power and soul. He sounds, I kid you not, like Tom Jones, in the very best way, all that richness and none of the histrionics. Auerbach has written or co-written all the tracks, along with folks such as John Prine and Nick Lowe, and, put Finley into a whole bunch of fascinating, modern settings, refusing to do the traditional gospel-blues sound. That's certainly at the core of the songs, but Auerbach brings all his production tricks to the table. So a tune like You Don't Have To Do Right might have a basic shuffle behind it, and regular slap bass, acoustic guitar and small choir of gospel singers, it also has various layers and levels of echo and effects, plus the legendary Duane Eddy on a twangy guitar break. The soulful complications rings through like an early '70's Four Tops cut, when they got serious about civil rights, pollution and the issues of the day. But then Auerbach reaches into his bag of tracks for more quirky sounds and mixes.

These productions aren't ever completely over-the-top, Finley and the blues are always out front, but they are proof-positive that this music, these great performers, have so much to knowledge and talent to bring to new sounds as well. It's probably a bit more along the lines of the Dap-Tone Records sound than the deeper blues Auerbach has worked in before, and I'm very happy with that, Finley is certainly one of the very best singers I've heard in a long time, and obviously very rooted in this core sound, as well as able to sound great for 2018 as well. What a treasure.
Posted by Bob Mersereau at 11:29 AM