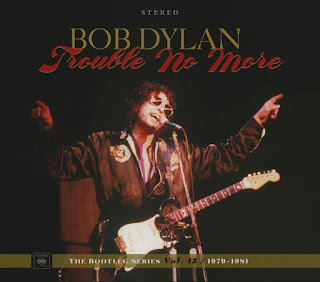 Bob Dylan's Bootleg Series is easily the most exceptional and important archival release series, with each volume revealing a treasure-trove of previously unavailable gems, legally at least. Some of these are no-brainers, such as the full issue of the Basement Tapes, or the infamous first electric tour of England ("Judas!"). Others are a shock, a brand-new examination of a period of Dylan's career that had been dismissed, like the amazing revitalization of the 1970-era recordings around the previously reviled Self Portrait album.

This latest release is much like that latter set, this time a chronicle of the controversial Christian period from 1979 to 1981. Over three albums and two lengthy tours, Dylan presented a new fundamentalist faith that came close to derailing his entire career. It was pretty much a total condemnation. Fans hated the unflinching preaching found in the lyrics, most of them Bible-based. On the first tour he did, following the release of 1979's Slow Train Coming album, he refused to do any of his old songs, playing only that album, plus as-yet unreleased material, much of which would end up on the next year's Saved release. Audiences booed, hurled insults at the gospel singers on stage with him, and walked out in disgust. It was hard to find anyone who would stand up for these songs. I knew one other person who thought the way I did, that there was actually some good music being made, no matter the message.

This collection, two CD's (or eight plus a DVD on the pricey deluxe version, filled with lots more live material) looks at the live tours, when these songs really came alive. Dylan always had a tremendous band, such as The Band, and this one was certainly up there. Anchoring it all was the brilliant Jim Keltner (Traveling Wilburys, John Lennon) on drums, along with Tim Drummond (Neil Young) on bass, Fred Tackett (Little Feat) on lead guitar, another Young favorite, Spooner Oldham, as well as Willie Smith on keys, and a troupe of five or six gospel singers, including the great Clydie King. Ahd while some might not have enjoying Dylan asking them When You Gonna Wake Up?, there was a fire coming from the stage. Dylan, always a fan and sponge of all the great forms, had toured with and loved the Staple Singers for instance, and got a great groove going.

The beauty of this set is hearing how the songs worked so well on stage, and how Dylan changed them up. Always tinkering, he led the band through different arrangements in shows and rehearsals. On the two-disc collection, each disc starts with a version of Slow Train, one from '79 and the other from '81, in quite different tempos. New songs were tried out, some of which made the Saved or Shot Of Love albums, while others, such as Ain't No Man Righteous, No Not One, remained unreleased until now.

By 1981, Dylan was backing away from the commitment to his gospel music. That year's tour saw him bringing back several of his greatest hits, after pressure from concert promoters who warned he might not sell enough tickets. The Shot Of Love album had a couple of songs that weren't gospel at all, and he was writing new, tremendous songs that were getting tour play, including The Groom's Still Waiting At The Alter, Caribbean Wind, and Every Grain Of Sand, all included here, the first two with significantly different lyrics. Now that we know he didn't stay there, it's easier to appreciate Dylan's gospel period for what it was, a prolific and intense two-plus years, a wild left turn from the master of surprises. And as a bonus, it features some of his very best and intuitive singing. It's another must-own.
Posted by Bob Mersereau at 6:10 PM