MUSIC REVIEW OF THE DAY: OTIS REDDING - (SITTIN' ON) THE DOCK OF THE BAY 50th Anniversary 45 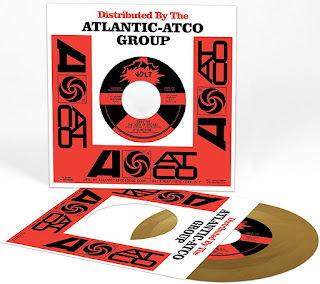 Stax Records began a year-long celebration of its 60th anniversary last May, which has featured best-of's, reissues of classic albums on vinyl, and coming up in February, a new box set of rare tracks and b-sides. In addition comes this 45, honouring what arguably the label's greatest track, for it's 50th birthday.

There's few sadder stories in modern music than what befell Redding. After making several incredible albums and singles through the '60's, and building his talents to become one of the truly great stage performers as well, he broke out of the Chitlin' Circuit with a festival-stealing performance at the Monterey Pop Festival in 1967. That was no easy task, as it also boasted the likes of The Who, The Grateful Dead, Big Brother and the Holding Company, Jefferson Airplane, and the first major U.S. appearance of the Jimi Hendrix Experience.

With a new, wider (and whiter) audience, Redding was ready to try some new sounds, away from the Southern soul shouters he was known for. He started writing the track in California, where he was staying on a houseboat after playing San Francisco. The lyrics pretty much describe the scene, someone from Georgia out in San Francisco, watching the ships and the waves come in on the bay. Producer and legendary Stax guitar player Steve Cropper helped him write the rest, and in was recorded in November. Redding was killed in a plane crash Dec. 10, and the song released as a single on Jan. 8, 1968, becoming a number one hit.

It was no mere sentiment, it's a tremendous song, and still sounds as haunting and important as it did five decades ago. And bonus, the B-side, Sweet Lorene, is a keeper too. York University ethnomusicology prof. Rob Bowman, author and leading expert on Stax, argues that the company's B-sides were often better than the A's, so it's wise to flip 'em over.

I find it interesting that the vinyl revival has spread to 45's. That's an offshoot of the ongoing Record Store Day releases, which always included singles for the collector market. This is aimed more at the newcomers though, that new generation still discovering the likes of Redding. It's packaged up to be special, pressed on gold vinyl, although I'd argue with their colour choice. It looks more like the shade of Dijon mustard, edging toward tan, rather than nice bright gold. And as it was a huge hit, it's almost impossible to find a used record store without a copy of the original single, or one of the many represses over the years. But if you want a new, unplayed copy in lovely shape (except for the mustard stain), you can buy this one for 10 bucks, sealed.
Posted by Bob Mersereau at 5:34 PM