MUSIC REVIEW OF THE DAY: DAVID BOWIE - BEAUTY AND THE BEAST (45) 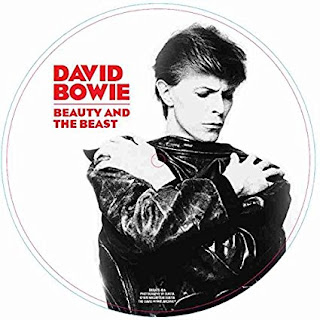 The new year begins with a new Bowie reissue, signaling that the flow will continue. Every couple of months, something new, or rather, re-worked, appears from Bowieland. This is the latest in the on-going picture disc 45's celebrating the 40th anniversary of each Bowie single.

Beauty And The Beast was the second single from the "Heroes" album, after the title track, which, despite it's enduring classic status, was hardly a hit. This one didn't come close, only barely entering the U.K. charts, and not placing at all in North America. Its negative tone and freaky sounds pretty much secured that fate, but it's a little gem too, just not something for the Top 40. It's a great example of the Bowie-Eno-Fripp-Visconti teamwork on the sessions, Fripp blazing away on a strange guitar sound that kept away the wider audience. Of course, this was also the Bowie period that influenced all the synth and New Wave bands out of Britain for a generation, so the legacy is solid, and it does have a bouncy chorus that makes it more lively than the dirge-like tracks on Low from the year before.

As usual, the original b-side of the single has been replaced by a previously-unreleased cut to entice buyers, thanks very much. This time, it's a live version of the "Heroes" cut Blackout, not the same one on the live Stage album of that tour, but a more rocky take from a Berlin show. The collector in me says thanks, and as always, there are a couple of great photos on the A and B sides, making it a nice visual addition to your collection. He apparently couldn't take a bad photo.
Posted by Bob Mersereau at 7:51 PM