MUSIC REVIEW OF THE DAY: TERRY GOMES - THE TROPICAL DREAM 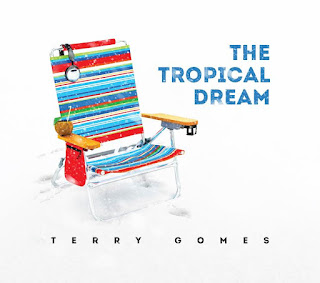 If Terry Gomes' new album feels like a trip, it's because it was created as a virtual one. While the guitar player was recovering from serious back injury, he imagined a tropical getaway, something to make him feel better, and that lead to this series of compositions. Gomes has played pretty much everything in his career, from rock to classical, but has settled of late in jazz/world music, especially music that touches on his Guyanese heritage. While you can hear lots of South and Central American and Caribbean influences, it's all a fusion of many forms.

This is an all-instrumental set, with Gomes' clean guitar leading the way, and each track featuring very specific instruments for each mood and style. Steel drums and trumpet start us out on "Happy Landings," setting up the trip down south. If that's a surprising combo, next comes tenor sax and Paraguayan harp. Various percussion parts feature throughout, Latin rhythms offering easy grooves. It's very gentle for the most part and also very soothing, something to take you somewhere warm in the winter, or somewhere healing, just as it was intended.
Posted by Bob Mersereau at 5:47 PM