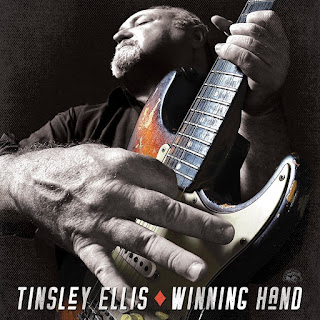 Ellis is the kind of bluesman who lists the guitars he plays on each cut just below the song title, which many be all you need to know about him. For those who drool over the words "1959 Fender Stratocaster", he's your boy. Of course, you knew that after 19 albums, and this one delivers yet again with his trademark stinging guitar and solid songwriting.

All but one of the cuts are Ellis' own, and fall into three categories: raging and raw, mid-tempo and fun, and slow and scorching. It's the latter that showcases his playing the best, especially on "Don't Turn Off The Light", where his lead playing (on a 2000 Les Paul Standard) is intense throughout, without the flashy fast work others need to impress. I do like his fun stuff too though, and the cover, Leon Russell's "Dixie Lullaby", shows him able to lighten up and still throw out a few killer licks. He might be best known for fireworks, but he's truly got all the bases covered.
Posted by Bob Mersereau at 10:37 PM