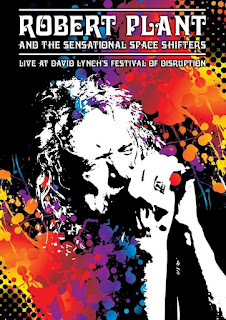 Here's Plant and his fabulous band doing their shape shifting of his music, blending together African, folk, rock and blues to create a sound really not found in any other group around. This set from 2016 predates his latest, last fall's Carry Fire, so the tracks mostly come from 2014's Lullaby and the Ceaseless Roar, so it's a little dated but still pretty fascinating, with all sorts of odd stringed and percussive instruments, such as the bendir drum and the lute-like tehardant from Mali. It's quite literally all over the map.

Plant's been all over the internet of late as well, telling all why a Zeppelin reunion is pointless, why look back when he has this great band and new sound with which to move forward? Good point, and certainly the albums are worthy of that confidence. However, there's still a life audience to appease, and on this there's a bit too much dabbling in the old Zep cuts. The cheers come up with the recognition of songs such as "Black Dog", "Going To California", and "Whole Lotta Love", the last in a blues medley. He has radically altered them, messing with the time signature, leaving out bits and parts, and no sign of Page-like guitar heroics, or his own classic wails. Yet it still has the feel of a retro show at times, and hopefully he's cutting more ties as he goes.

This show was a benefit for filmmaker/music fan David Lynch's foundation, which is something to do with meditation saving the world. Fair enough, except that means the bonus material here is all Lynch talking about the healing powers of transcendental meditation. Maybe he's right, but I'm here for the tunes, and Lynch being Lynch, most of the interview bites come out kinda kooky. Don't ask about the fish story. Concert yay, extra features blah.
Posted by Bob Mersereau at 9:55 PM