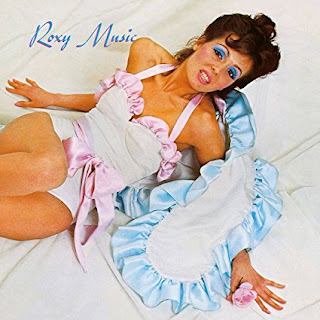 Roxy Music's 1972 debut stood out as weirder and wilder than most everything else being done then, certainly way further out than any of the glam in England, Bowie's Ziggy included. Here were squawks and honks and howls, and we're not just talking Eno's synth and tape contributions. Andy Mackay's oboe and sax bordered on free jazz. Phil Manzanera wasn't playing like all those blues guitarists and Bryan Ferry was an unconventional singer who seemed to be fighting against the music at times.

The closest comparison was King Crimson, but those guys were more muso and petulant. Roxy Music was an accidental result of various ideas and discoveries, from Eno's introduction to a cheap synth and plugging it into his tape deck, to Ferry's art school friends and fashion sense, to nobody thinking it odd that they had a lead oboe player. It all worked out fine, and it was intriguing to say the least.

The group's debut featured a much different sound than the polished, sexy grooves of Avalon or the funky allure of "Love Is The Drug", much more successful in North America. But in England, this gave them big early success, a huge single in "Virginia Plain" and a fan base that included lots of tastemakers and critics. They became appalled at the slick sound of the latter-day Roxy, and Ferry's commercial ambitions. This remains the favourite of the group's albums for them, and a few like-minded souls in the colonies as well.

Roxy Music are one of the last big bands to raid the vaults for deluxe editions, so this is most welcome by those fans. The two-disc version is well worth it, with the second CD consisting of 70-plus minutes of BBC recordings from the time, both before and after the making and release of the record. Luckily, legendary BBC host John Peel was an early convert to the band, so there are three different Peel Sessions featured, as well as a live set of five cuts. The band was very much in flux in those days, with both the lead guitar and bass player changing over the year. Davy O'List, ex of The Nice. appears on the first Peel Session, and while his playing is solid pro, it lacks the out there vibe Manzanera brought. But the whole band was developing quickly, and you can hear the playing improve and the songs becoming more focused through this year of radio sessions.

There's also a super deluxe version available, which features another CD full of demos and out-takes, including their famous 1971 tape with a completely different guitarist and drummer. Plus there's a DVD of nine live and TV performances, and a 5.1 mix of the album. However, that will run you a whopping $142 bucks, and there's grumbling in fan land about that price. The two-disc version features a very strong historical essay, and unless you're a fanatic, it will probably do just fine.
Posted by Bob Mersereau at 7:38 PM