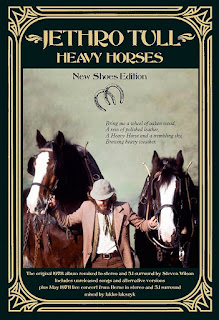 I'm repeating myself here, but once again, the Tull camp sets the standard for album reissues with is ongoing series. It's not difficult, it's just treating the material and the fans properly by giving them everything all at once, and in high-quality audio and packaging. That means all the associated session material, from B-sides to unreleased numbers to alternates, lots of live work, and even video. You get multiple mixes of everything on DVD, and even a hidden track. The generous 96-page book has the entire story of the album, not fluffy and overly praising, but realistic and fact-based, warts and all. And when you put all these boxes together over the course of the decade covered so far, you get the complete history.

Heavy Horses was the second of Ian Anderson's trilogy of rural England-themed album, coming after 1977's Songs From The Wood. Like the rest of his '70's album, there was a loose lyrical concept, stemming from his move to the English countryside. The songs were more folk-based than other Tull albums, but still had lots of other elements, including lots of strings and some heavier guitar moments. It was a sadder, darker album though, with regrets that some of the old rural values were gone, as symbolized by the replacement of the workhorse by the modern tractor. It's a pretty well established theme, you'll find it in Lord Of The Rings, for instance, and I'll certainly take that over somebody stumbling through the writing of another love song. The title track, Moths, One Brown Mouse, these are all strong Tull songs with good melodies and drama. The variety of music makes this album, and its predecessor two of the better '70's releases, a step above works such as A Passion Play and Minstrel In The Gallery.

Tull fans will know that the next album in line was the double-set Live-Bursting Out. Instead of a simple reissue of that, it's included here, not just the original, but the full show from which it was taken, from Berne, Switzerland in May 1978. Importantly you get the song Heavy Horses back in the set list to give you the whole experience of what was a really strong tour. Anderson's stage banter is funny and engaging, Martin Barre is on fire on guitar and the whole band shows why they were one of the top touring draws of the decade. It's a strong mix of the big favourites, such as Aqualung, Too Old To Rock and Roll, Too Young To Die and a long segment of Thick As A Brick, and lots of the new material. I've always liked '70's Jethro Tull, and these boxes have made me appreciate them even more, learn a lot and enjoy revisiting, a great experience for music collectors.
Posted by Bob Mersereau at 12:05 AM