MUSIC REVIEW OF THE DAY: LED ZEPPELIN - HOW THE WEST WAS WON 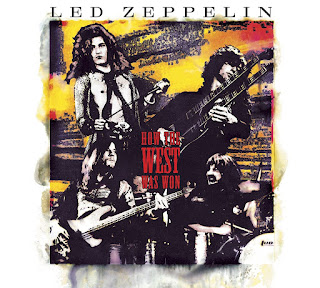 It seems like this just came out, but it was actually 15 years ago, so it missed the rebirth of vinyl, which is the main reason it's being reissued now. It sounded great in the first place, after much detailed work by Page himself, and now gets some retweaking. This is where the detailed restoration has gone, and it's now the focus album for concert stuff of Zeppelin, rather than the inferior, bloated The Song Remains The Same soundtrack.

Page calls this the height of Zeppelin live, and certainly they are firing on all cylinders here. They are also by this time (1972) huge, conquering the new arena circuit in the U.S., and showing how monster shows should be done, for then and for the future. I tried to put myself in that audience, and can easily imagine how blown away people must have been. Disc one (or albums one and two) in particular is a tremendous listen still, songs that come at you with power and majesty. Particular effective is the opening trio of Immigrant Song, Heartbreaker and Black Dog. Stairway To Heaven is perhaps a might underwhelming, but it always was live, one song where it's impossible to meet expectations. But Going To California is a delight, its different textures a good contrast from the heaviness, and you'll notice Plant refer to "Joni" in an adlib, letting all know that Joni Mitchell was the inspiration.

I find discs two and three (or on vinyl, albums three and four) lose the momentum, thanks to the expansions of Dazed And Confused (25:25), Moby Dick (19:20) and Whole Lotta Love (20:59), which were probably more effective in person. And as for the infamous drum solo in Moby Dick, well, those things stand out like bell bottoms and afros do from the '70's these days. And the band really didn't have a good encore figured out on that whole tour. Certainly Rock and Roll and The Ocean worked, but ended on Bring It On Home seems like a let down. Disc one is the one to replay, as an example of when giants roamed the Earth.
Posted by Bob Mersereau at 12:36 PM