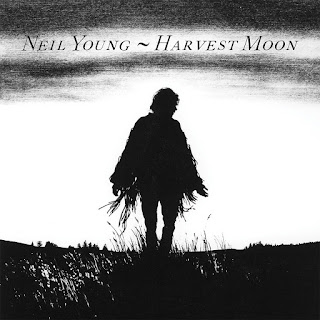 It's getting hard to keep up with all the new albums, movies and TV shows Neil Young is putting out, mixed in with the constant stream of reissues, plus of course the currently free content on his website archives, all of his released music streamable. We wait anxiously for his new flick, Paradox, filmed on the Earth tour, to debut on Netflix, and his Roxy: Tonight's The Night Live album to be released on Record Store Day in April. But don't miss out on this release, slipping out during this brief lull in the schedule of new stuff.

This is the first readily available version of this Young favourite on vinyl in Canada and the U.S., after a brief availability at last November's Black Friday RSD. It came out in 1992, when vinyl was pretty much dead, so it didn't get a release then, except in Europe. Now it's a three-sided album, to cover the 50-plus minutes and keep the fidelity high, with the fourth side an etched graphic of the cover image. The extra side is very appreciated, as this largely acoustic album boasts some of the warmest-sounding songs of Young's career, ideal for a vinyl listening.

The album marked a real burst in popularity for Young, when the new generation of MuchMusic and MTV viewers embraced him. Marketed, with Young's active approval, as a followup of sorts to Harvest, for that generation the two albums are spiritually connected. Young used many of the same players and singers, including Linda Ronstadt, James Taylor, Kenny Buttrey, Tim Drummond and Ben Keith, and even copied the style of playing. Listen to the acoustic guitar on War Of Man, right down to the chord changes, it echoes his playing on that earlier album. He drops the phrase "old man" in You and Me, and the set positively reeks of nostalgia. One Of These Days is a tribute to the '70's musicians and friends ("And I'm gonna thank that old country fiddler/and all those ruff boys who play that rock and roll"), while there are a couple of tributes to his then-wife Pegi and their initial courtship.

So Young knew exactly what he was doing, but at the same time, these are for the most part really great songs, and it was a welcome return to acoustic music after the 80's dabbling in proto-electro, rockabilly, country, blues and doom rock. Also it was yet another really great album after 1989's Freedom, 1990's Ragged Glory and the 1991 live set Weld. And now listening back decades later, now that what's new and old doesn't matter, we can appreciate that it is a strong companion to Harvest. And it's even better on vinyl.
Posted by Bob Mersereau at 12:45 PM