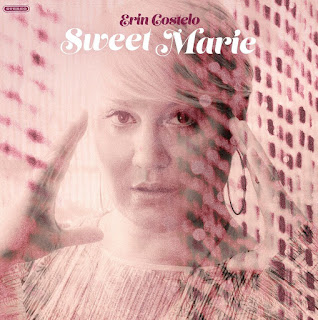 As explored in the documentary "Sweet Marie: In Studio with Erin Costelo" that aired this year on CBC, Costelo pushed herself to record this album in a mere 10 days. Honestly, if I didn't know that on first listen, you could have told me she worked on this for a decade. Nuanced, dramatic, meticulous, I can't think of another album like it, certainly not an East Coast one at any rate. As with the Halifax songwriter/producer's other four releases, it's a rich soul album. This time though, it's far more mellow and subtle, a moody piece, soulful-emotional.

There's a story here, or a theme, a personal yet universal one about a woman finding confidence and freedom. Costelo's ability to tap into those feelings, both lyrically and musically makes the album a profound statement, while each track pulses with a tight groove. If you want a comparison, think Bill Withers or Roberta Flack, tremendous singers who seemed to feed off the textures in the music, and vice-versa. The core band performs tremendously and in complete lockstep with Costelo and her piano: Leith Fleming-Smith on organ and keys (Matt Mays), her long-time guitarist Clive MacNutt, bass player Anna Ruddick (Bry Webb, Sarah MacDougall) and drummer Glenn Milchem (Blue Rodeo).

There are a couple of more uptempo numbers here, including first single Lights Down Low and All In Your Head, and I certainly wouldn't suggest it's a slow, or ballad-heavy album. It's intense for one thing, in its depth of emotion and the sheer power of its beauty at times. The arrangements alone are enough to keep you riveted, especially the strings on tracks such as Epilogue and the closer and lone cover, Randy Newman's I'll Be Home. It's so rare to hear a contemporary album made in such an uncompromising way. It seems unburdened by those old commercial considerations, of will it sell? Is there a single for radio? A big-name guest star? Instead, it feels like a fully executed artistic statement.

Erin Costelo is launching the album with a series of dates including the following: