MUSIC REVIEW OF THE DAY: THE BEATLES - THE FIRST RECORDINGS 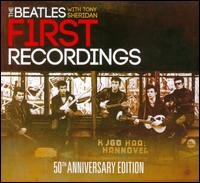 I'm pondering.  Can I recommend a 2 CD set not for the music, but for the booklet?  For its historic interest, rather than the actual quality of the music on the discs?  Here's the issue:  The Beatles didn't just pop up at George Martin's studio singing Love Me Do one afternoon, fresh-faced from the streets of Liverpool.  As we know, they had done long, hard time playing crazy sets for a tough clientele in Hamburg.  While they were there, a top producer, exec and hitmaker himself, Bert Kaempfert, liked them enough to sign them to a small contract, and record them with fellow Brit rocker Tony Sheridan.  Sheridan was the lead singer, and The Beatles got called The Beat Brothers for some reason.

The single, My Bonnie, was what caught Brian Epstein's attention, why he checked them out at the Cavern Club, and became the manager.  Kaempfert, with not much happening, let his contract with the band lapse.  Then things started happening, and you know the rest.  Meanwhile, these few Sheridan/Beat Brothers tracks ended up getting grabbed up and sent out all over the world, and even became hits, thanks to clever packaging and unsure purchasers.  They thought they'd get John or Paul singing, and they couldn't recall a Tony in the group.

There actually was one cut with a Lennon lead vocal, Ain't She Sweet, and another instrumental, Cry For A Shadow, that he wrote with George.  But the rest were Sheridan, and not great.  Still, those eight cuts that were found from the sessions have been press and repackaged many times, and still don't get any better.  That is, until they got put in this silk purse.

It's the 50th anniversary of the real recording debut of The Beatles.  In honour of that, the tapes have been obtained by Time-Life music, who do excellent historic releases, such as recent boxed sets from Hank Williams.  The value of this package is in the excellent liner notes, and wonderful photos and memorbilia pictured.  It's like a museum display, and despite reading about these recordings many times, I learned quite a bit from historian Colin Escott's notes, and saw photos I've never seen before from Hamburg.  This is a fascinating story, and to have it presented so well is a real joy.

Oh, there's the music.  Those eight cuts have several variations to them, including mono and stereo versions, different mixes used in Europe and the U.S., one re-recorded Sheridan vocal, added after The Beatles got hot, introductions in English, introductions in German.  With all that, eight songs become 34 different cuts, spread over two CD's.  It gets ponderous by the end of disc one, and the mono versions, and then you have to do it all over again in stereo.  Or, don't.  Just play the eight cuts once.  You'll notice the instrumental, Cry For A Shadow, is pretty darn good really.  The rest?  We don't need to hear anybody singing When the Saints Go Marching In as a rock n' roll song.  Just read the booklet.
Posted by Bob Mersereau at 7:51 AM