MUSIC REVIEW OF THE DAY: THE DECEMBERISTS - LONG LIVE THE KING 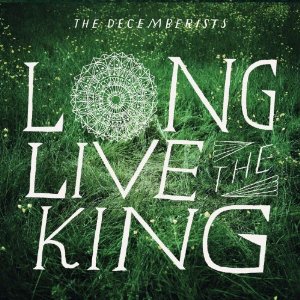 Why, what perfect timing, this being December and all.  It's another offering from the group, the second of 2011.  This is part two of the sessions for the album released in January, The King Is Dead.  What we get is six tracks left off the original album, as they really didn't match the tone of that big hit for the band.  They include four solid studio originals, a home demo, and a deft cover of the Grateful Dead's Row Jimmy.

The songs go back to the earlier sound of the group, a little more folky, a little less calculated.  I wasn't a big fan of The King Is Dead, except for a couple of cuts, as I did find it too polished and forced.  These tracks feel like the band is more relaxed and therefore more true to what they do best.  It's energized and modernized folk, songs that feel almost traditional, but clearly crafted and happily played by youngsters.  The "demo", I 4 U & U 4 Me, is the sound of a great performing group recording off the floor, and the lack of polish and pretense is a sound I'd much prefer they chase.  Burying Davy is a takes them way back, a real British countryside number, circa 1750.  I don't know if I've ever heard a band better suited to covering the Dead either, settling perfectly into the staggering beat and almost off-kilter plucking and tinkling.  Plus, Jenny Conlee sounds beautiful behind Colin Meloy's countrified lead.

These tracks were leaked on-line in that weird official way that bands and companies do now to attract attention and buzz, figuring the publicity is better than the lost sales.  By the look of the 'net, it worked because fans and downloaders are crowing about some or all of them, especially lead track E. Watson, a major composition for the group.  I just hope there's enough buzz to keep them leaning in this more relaxed direction.
Posted by Bob Mersereau at 6:34 PM