MUSIC REVIEW OF THE DAY: ROLLING STONES - SOME GIRLS LIVE IN TEXAS '78 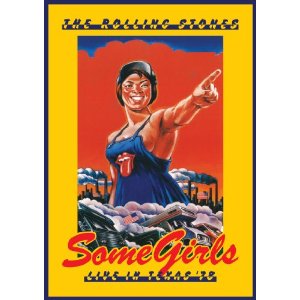 Remember when giant rock bands went on the road with a hot new album, and played most of it, throwing energy into these fresh songs, excited to introduce it to fans?  And remember when fans actually wanted to hear something new from their heroes, instead of a greatest hits show from the past, and didn't rush to the concessions and cans when the first unfamiliar notes were struck?

Here's what that was like.  The Rolling Stones were back after a few lackluster mid-70's years, fueled by that old motivator, one of them getting busted (Keith, Toronto, Heroin).  Created amidst that serious situation, and other external threats to the band (the rise of punk and disco), the Stones pushed back by incorporating shades of those new music styles, and simply being edgier than either.  While it may be the last time that happened, that doesn't diminish what a fine album Some Girls was.

And now we see, what a fine tour it was too, as the band cockily laid out a full seven of its ten cuts, in order, in concert.  This new DVD and Blu-Ray features a previously-unissued show from 1978, deep in the heart of Texas.  It's a rejuvenated band for sure, featuring new Keith foil, Ron Wood, now fully integrated, and only former Faces keyboardist Ian McLagen swelling the ranks (oh, plus stalwart Ian Stewart too, whenever he felt like plunking piano).  That's opposed to the last few tours, when actual official Stones are outnumbered by support players.  So kids, this is why some of us still snort about mega-concerts at Magnetic Hill and such, there's a DIFFERENCE.

"Go ahead," spits Jagger.  "Bite the Big Apple.  Don't mind the maggots."  He's singing about NYC, deep in decay those days, and if there's one thing Jagger could document, it was late 20th century turbulence.  You could tell Keith knew he was onto something, singing about the Twin Towers of depravity and depression that marked the city.  While Miss You may have felt a little disco, it was the darkness in those dance clubs he was really tapping into.  Anyway, watching Richards and Wood battling and riffing on stage, skinny and half-conscious, it just all seems so real, perfect, well done.

With the Some Girls songs the centerpiece, the group seems to almost rush through the opening four songs, desperate to get to the new stuff they knew to be so excellent.  Let It Rock is hurried and sloppy Chuck Berry, Jagger even forgetting the words, a throw-back to the 60's when opening numbers were often tossed off in order for the sound crew to get levels and the guitar players to get comfortable.  All Down The Line is pretty much the same thing.  Finally Honky Tonk Women reminds us this is the Greatest Band In The World, and Star Fucker reminds us they are the rudest, thank you Sex Pistols.   Then it's showtime, with When The Whip Comes Down leading off the new album set.

After that, we're back in familiar Stones territory, but at a rare peak.  It's the best Love In Vain I've seen, Jagger morphing into James Brown.  Tumbling Dice kills, Jagger back dancing and preaching.  God he's great tonight.  He's in total command now, jumping, pointing, teasing the audience, the front rows right at the edge of the stage, with no security perimeter in those days.  No giant inflatable penises, no props at all.  The comic relief comes from Mick slapping Ronnie on the bum during guitar solos.  Happy, Brown Sugar, Jumpin' Jack Flash.  They call them dinosaur bands now, The Stones and The Who.  But there was a time when dinosaurs ruled the Earth, and they were scary, dangerous, bad-ass motherfuckers, the best there ever was.
Posted by Bob Mersereau at 7:52 PM