MUSIC REVIEW OF THE DAY: ELVIS COSTELLO & THE IMPOSTERS - THE RETURN OF THE SPECTACULAR SPINNING SONGBOOK!!! 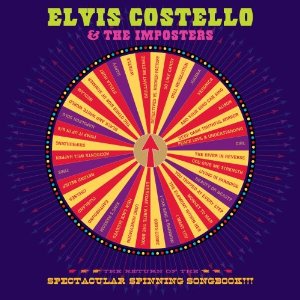 If you are a pathetic, ridiculous music collector who has to have every b-side, reissue, alternate take, soundtrack number, guest appearance, picture sleeve 45, best-of collection, and magazine article on your favourite artist, this column is for you.  We (because I am guilty as charged) are a pathetic bunch, having wasted what could have amounted to a very decent RRSP on buying multiple versions of the same song, shelling out $30 for an import CD just because it has one minor difference in one song that we feel we must own.  Right now, a couple of doctors I know are scribbling down "OCD" with arrows pointing at my name.  Stop snickering, we're all the same.

I got this jones for a handful of artists, but none more so than Costello.  Ever since I discovered in 1979 that he routinely released 45's with non-LP b-sides, I was off to the races, grabbing all those pricey British imports.  Even when he turned around a couple of years later and put them all on an easy-to-buy album called Taking Liberties, thereby rendering my investment near-useless, I was still happy, as the album had a couple more new-to-me tracks.  This has not diminished a bit since, and I've grabbed every reissue, deluxe version, DVD and stray 45 (he's still making them!).  I don't think anyone has been reissued more, with ever-expanding numbers of bonus cuts.  Take his debut, My Aim Is True.  There was the original Columbia album.  Then it appeared on CD.  Costello got the rights back, and teamed with Rykodisc, adding  several bonus cuts.  Those rights ran out, and it went to Warner/Rhino, who turned it into a double with many more demos and such.  Then the rights went to Universal, who at first sent it out in its original, no bonus cuts version.  Then they stuck it out as a Deluxe, squeezing the demos and such onto disc one, and adding a complete period live concert as the second disc.  It goes without saying I have owned all these.  At least I didn't buy it on cassette.  However, I recently bought the CD soundtrack to the TV show House, to get him singing a cover of Christina Aguilera's Beautiful.  On eBay.  Cost me $20.  It's not very impressive, don't do it.

I guess you won't be surprised that I have succumbed to the ultimate temptation offered by the Costello machine.  The Return Of The Spectacular Spinning Songbook!!! is a deluxe boxed set, limited to just 1500 copies world-wide.  It features music from his tour this spring with The Imposters, recorded at the Wiltern Theatre in Los Angeles.  There's one CD of music, and one DVD, with about two-thirds of the CD cuts the same as the DVD.  Then there's a four-track vinyl addition, a bonus of four more cuts.  Add it all up, you probably have most of the show, about two-hours of music.  And the price for this honor?  $249 if you order it from amazon.ca right now.  Gack.

These deluxe boxes are becoming the norm for the pricey collector market.  Pink Floyd did multiple disc versions for the reissues of Wish You Were Here and Dark Side Of The Moon, with The Wall coming out shortly.  The Rolling Stones have a few of them, the most recent being the Some Girls box.  The Who did Live At Leeds and Quadrophenia, and The Beach Boys have one for SMiLE.  These all feature more discs than the regular versions, five or six usually, or perhaps 180 gram vinyl versions, and a nice big box with a nice big book in it.  And the usual price is around $120.  So what justifies the doubling of that grand price for Costello?  Well, we get an autograph. At least, I think it's his autograph.  It would take a highly-skilled forensic examiner, maybe that guy on Pawn Stars, to judge if it even says Elvis, such is the hand-writing.  Yes, there is a very good hard-cover book, and there's a replica of the spinning wheel that was featured on the tour, which audience members spun on stage to select a song, The Price Is Right-method.  Still, this packaging isn't that costly, it isn't gold inlay, so what we're really paying for is the exclusivity, the elite membership in the club, the collectible value.  But of course, what's really happening here is that us life-long collectors just can't bare to have something out there we don't own.  It should have also come with a t-shirt that said SUCKER.

Oddly enough, the person to blow the whistle on the whole scam was Costello himself.  Shortly before its release, Costello put a message on his website advising people NOT to buy his new record.  Even he found the price ridiculous, and claimed to not know the record label was going to charge that much.  He advised people to who had that kind of money to instead invest in a recent, wonderful Louis Armstrong box, with hours more music, which Costello said was better anyway.  Now, cynics have weighed in, saying he must have known the price being charged, these details are carefully negotiated, and he did sign each one (I hope).  But it's possible he didn't, or his management didn't tell him, or they didn't ask, or something.  His father was very sick of late, and recently passed away, so it could have been the last thing on his mind.

The kicker though, also came from Elvis's own pen, when he informed us that the individual parts of this set would soon be available separately to purchase, at a regular price.  Double gack.  So all this stuff I could have had for, like $40 bucks tops.  And all I'm going to get is a book, a box, and a scrawl for my extra two hundred?  Now I really want that SUCKER t-shirt.  Because there it is, also on amazon.ca, coming in February, the cheap version of the disc.

Of course I should have seen this coming.  It's just the sheer nerve involved in sticking this version out in advance of the other, and no full disclosure of the plans.  All the other super-deluxe boxes come out at the same time, and there's no subterfuge involved.  I know, buyer beware, and all that, and I'm getting awfully close to sour grapes rather than review here.  But I did believe, at the time of purchase, that this would be unique, highly collectible, and aside from bootlegs or file-sharing, the only source for this.  Since it is not, it is my opinion it is way over-priced.  By at least a hundred bucks.  I'm sure it took Elvis a couple of days to do all the autographs, but even he says it's a rip-off.  With a couple of books out myself, and hard-bound, high-quality paper, with tons of pricey photos, I know a bit about packaging, and still, there's a ton of profit on this.  $249 x 1500 equals $373,500 gross flying around, and somebody at Concord/Universal is smiling .

Jeez music company suits, don't pick on your last customers.  We're the ones not downloading, and paying cash for everything, remember?  The last of a dying breed.  It's probably not a smart idea to alienate us.

Oh right, the music.  The show.  It's a lot of fun, there's this wheel, and real audience members, and it's one of the best-shot concert videos I've seen, and there's a go-go girl dancing in a cage, and Costello is acting this funny character, and The Bangles guest and go-go dance too, and Peace, Love and Understand and Alison, and lots of other old favourites and some recent good ones and even a brand-new song, plus an old one he'd never done live on stage before.  But you know what?  I think I'll wait to review it probably when the reasonably-priced versions come out, because with this special, limited-edition, ultra-hip, only the cool kids have it version, it's really not the same experience if you're not staring at his signature while you're enjoying the music.

There's one born every minute, and today, that's me.
Posted by Bob Mersereau at 9:34 PM