MUSIC REVIEW OF THE DAY: U2 - ACHTUNG BABY DELUXE EDITION 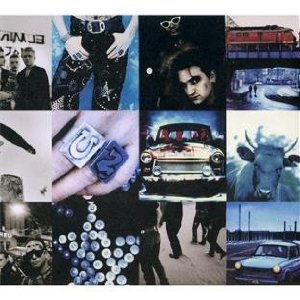 I'm hard-pressed to name another U2 album I think is better.  Even if you have joined the 99% who think Bono should pay his taxes in Ireland and shaddup about everything else, it's hard to argue with this non-stop parade of hits and classics.  As home to "One", "Mysterious Ways", "Even Better Than The Real Thing" and "Who's Gonna Ride Your Wild Horses", Achtung Baby is a high-water mark for the group's connection with songcraft, and it stands at a crucial time before they got REALLY overblown, with the Zooropa and Pop discs.

Not that the signs weren't there; "The Fly" introduced some sort of Bono character, and "Zoo Station" pointed to the tour concept, but they were still good songs for the most part, and rocked.  Yes, they were trying hard to be big, but they were grand gestures, and not empty.  Even the Singer still seemed connected to his audience then, able to admit he might be "Tryin' To Throw Your Arms Around The World".  This is one of the last great albums, in the old, L.P. sense, before downloads and single cuts took over.  Each song packs a punch, usually both musically and literally, and stands distinct.  It may be because of the unique situation of the recording.  The usual Lanois-Eno team wasn't really working in partnership; rather they were changing roles, and including the talents of Flood and Steve Lillywhite as well, depending on the cut.  For instance, on "Zoo Station", it's Lanois produced, Flood mixing and engineering, no sign of the others.  On "Even Better..", it's Lillywhite producing with Lanois and Eno, and on it goes for each cut, some combination of the bunch.

This is the 20th Anniversary edition, and is the norm now, you have a choice of how much extra material you want, and how much cash to drop.  The Deluxe 2 CD Edition is just fine for me, especially since the bonus disc is so strong as well.  Comprised mostly of b-sides, it is a great mix of outtakes, inspired covers and interesting remixes.  The excellent version of Lou Reed's "Satellite Of Love", which became a tour highlight, is found here, as is a cool take on the Stones' "Paint It Black".  The remixes of "Mysterious Ways" and "Who's Gonna Ride Your Wild Horses" are those rare beasts that add something to the tune rather than just mess with it.  The Super Deluxe set has 10 discs, including 4 DVD's, and costs $118 minimum.  Get this, the Uber Deluxe Box will run you $435, and seems to be mostly a limited-edition thing with magnetic parts and a pair of Bono's Fly sunglasses, I kid you not.  Look, I'm one of the rare music writers who still likes U2, but if you find yourself tempted by either of these monstrosities, we have got to get you outside more.
Posted by Bob Mersereau at 7:34 PM