MUSIC REVIEW OF THE DAY: THE BEST OF BURT BACHARACH - ANYONE WHO HAD A HEART 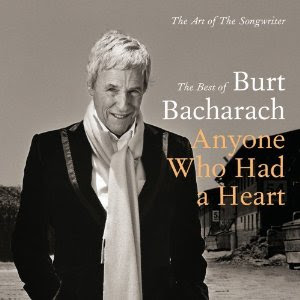 I don't have to justify Bacharach, do I?  True, more people of lesser generations than I would know him from his cameo in, I believe, the second movie in the Austin Powers oeuvre.  However, his way with a chord progression is now one of legend, and any grumblings about his M.O.R. leanings I will ignore, as they no doubt come from those without a taste of finer melody and harmony.

In other words, sure, I know a lot of these are getting close to the fromage factory, but I still love 'em.  Okay, I can do without hearing That's What Friends Are For ever again in my life, but at least here it's an instrumental by Kevin "Leno's Guy" Eubanks.  And that's the trick with this grandly-packed double-disc, 40 cuts, and many of them are less-familiar versions of the big hits.  We get The Marvelettes doing Message to Michael instead of the hit version by Dionne Warwick.  Brenda Lee handles Wishin' And Hopin' rather than Dusty Springfield.  Isaac Hayes does his low sexy thing on I'll Never Fall In Love Again, subbing again for Warwick.  In fact, Burt's main muse is found here only once, with her exemplary Anyone Who Had A Heart.  Such was her way with a Bacharach tune and a Hal David lyric, if the hit versions of the songs were the ones used here, it would pretty much be a Dionne Warwick Greatest Hits package.

There were plenty of others who scored big with the Burt magic over the years, included The Fifth Dimension (One Less Bell To Answer), The Stylistics' wonderful You'll Never Get To Heaven (If You Break My Heart), and the epic Gene Pitney hit Twenty Four Hours To Tulsa, all here.  But it's excellent (for Burt freaks) to have this set's alternative selections, as the man's been compiled before, and this differs significantly from previous packages.  Aretha Franklin makes I Say A Little Prayer her own, recorded in her Queen of Soul heyday.  Rick Nelson never had a hit with the obscure Take A Broken Heart, but he should have.  Gloria Gaynor's disco take on Walk On By is ..  actually, pretty crappy, but you take those risks for the sake of novelty here.

Yes, evil things have been done to Bacharach's songs over the years, and some more omissions would have been fine, such as Patti Labelle and Michael McDonald's On My Own, Neil Diamond's E.T. hit, Heartlight, and (gag! moan!) Arthur's Theme by Christopher Cross.  But you're looking at a good 80 per cent super-duper here.  Caveat:  Iron Maiden fans will probably not dig this.
Posted by Bob Mersereau at 10:14 PM