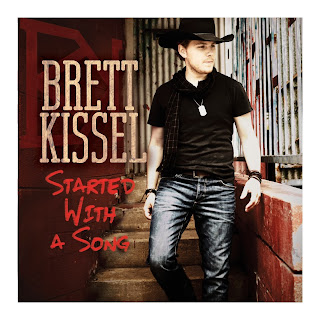 The next time I start complaining about all the modern country performers that don't really play country, aren't really from the country, and just sing a bunch of cliches about trucks and cows and old-fashioned values, remind me about Brett Kissel.  When Kissel sings about working on a farm, he's telling the truth.  He's worked on a farm since he was a child, still does when he gets the chance. That's not too often these days.  He's very busy with his country career.  Reached at his house in Edmonton, Kissel had to stop packing in order to chat.  He's sold the home, and he and his wife are moving full-time to Nashville, to keep up with the songwriting and demands that are now coming his way.

The young Alberta singer-songwriter has just exploded onto the national charts with his album, Started With A Song.  At just 23, most performers are just figuring out what they want to be.  Not Kissel.  He's been working towards this almost his whole life.  "The start for  me in country was when I learned to walk and talk," he explains.  "It was played exclusively at our home, I don't remember anything else.  The radio station very much centered on country, a lot of classics.  And my grandparents had an extensive collection.  I'd hear Charlie Pride or Johnny Cash, and at four years old, I thought that was new country!  The first song I played was I Walk The Line, and at 8, I was trying to pick Tennessee Flat-Top Box.  I would switch the lyrics to "In a north Alberta town".

That north Alberta town wasn't even a town, it was a cattle farm. "It's a small farming community called Flat Lake.  Nobody knows where the hell it is.  St. Paul is close, Bonneville is close.  It's a working family farm, my parents still work it.  It's a fifth-generation farm.  I still try to get out there as much as I can, to help when its busy season.  When I grew up, before school, after school, every day I did the farm chores."

As much as he liked the farm life, music was his calling, and at 12 years old he put out his first album, with a couple more to come in his teens.  He became a local star, and wanted to work on getting his music out to a bigger audience.  Started With A Song was done on his own time, and his own dime, and pitched around to national labels.  Remember, this is a time when most major labels have stopped gambling on new music.  But Kissel impressed them all, and he was impressed with Warner Canada, so a deal was signed for Kissel and his ready-made package of hits.

So far, so great.  The first single, the title cut, made it to #1 on the CMT video charts, and was the most-played Canadian track at country radio.  Single #2, Raise Your Glass, has just come out, as has the album.  Kissel hasn't stopped working long enough to savour it, but he's happy the plans are working:  "I'm extremely pleased.  We're always looking to the next single, but when I look back at how well it's been received, and sold, I'm really proud.  It's better than I'd expected.  I was excited about getting signed, and recording, but seeing the song climb, and make it to number one, it was an incredible feeling."

He keeps racking up some incredible experiences, as he makes his way in the country world.  A chance meeting with the NFL Pro-Bowl players led to a connection made with the quarterback of the Tennessee Titans at the time, who happened to write country songs himself.  So they co-wrote one, Long Hot Summer, which is a bonus track on the deluxe edition of the CD.  "Kerry Collins, that was one of the coolest experiences," laughs Kissel, "250 pounds, 6;5", definitely not the normal co-writer.  But here he is coming up with great lines, picking mean guitar.  We wrote at his house in Tennessee.  I couldn't wait to get on the phone and tell my friends about that one."

That's pretty cool for Flat Lake.  Or Nashville for that matter.  Anywhere.  You can't make this stuff up, and Kissel hasn't, not a word of it, all his experiences are real, all his stories in his songs are true, and that's what this actual country kid is most proud of.   "It was most important to record an album that was true to me and what I believe in.  I wanted it to have radio success, and contemporary feel, but it really excited me that it came as a package, it was true. My number one priority was to come up with a group of songs that told my story.  And as long as I can write songs, and chase cows with my father and brother every once in awhile, I'm a happy guy."
Posted by Bob Mersereau at 7:58 PM