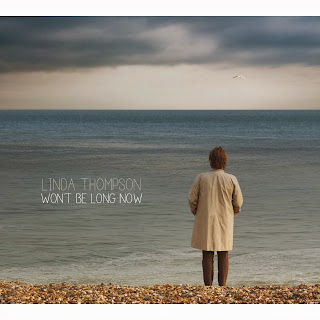 One of the great modern folk voices, Thompson was always in the shadow of her ex-husband Richard, partially because on their shared 70's albums he did much of the writing, playing and some of the singing, while she only sang and wrote a bit  Later, her output slowed to a trickle, a vocal paralysis to blame for some of that, while his recordings and reputation increased.  None of this changes the fact she's a grand performer, and always puts together a heartfelt and terrific set of songs, often laced with irony and sadness.


Thompson also surrounds herself with class-A companions, somewhat easier these days as her family has matured in the business.  Her most frequent collaborator is her son Teddy, who features strongly on the album, co-writing with her, performing, bringing in a new melodic and upbeat approach, especially on the cut As Fast As My Feet, as fun and poppy as she'll ever get.  Thompson's other kids are here, Kami and Muna, and even a grandchild, plus Richard and one of his sons too.  Also on board is our own Ron Sexsmith, and the daughter of Levon, Amy Helm.


Fans will be thrilled with the reunion with Richard, on opening cut Love's For Babies And Fools, which features just his acoustic guitar playing.  It's a return to their classic sound, and there's no denying the delicious humour in this anti-love song, as Linda sings “I care only for myself / Love’s for babies and for fools”.  Elsewhere there's everything from ancient-sounding folk to grand harmonies, a fine full album.
Posted by Bob Mersereau at 9:22 PM