MUSIC REVIEW OF THE DAY: ELVIS COSTELLO & THE ROOTS - WISE UP GHOST 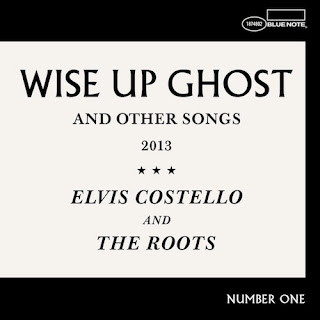 Lots of buzz about this one, and for good reason.  It's a stirring collaboration, the sting of Costello and the beats n' funk of The Roots.  Much has been made about the way it came about, midwifed as it were on the Jimmy Fallon show, where The Roots reside as house band, and Costello was the dream guest of the program.  After hitting it off, The Roots made the approach, as they were all huge fans, and Costello was certainly enjoying their pluck.  At first, it was suggested they update some of EC's older tracks with the band providing a new groove.  Soon though, they were making enough to create a whole concept.

There are still some leftovers from the initial remake/remix idea to give us an understanding of what they conceived.  You'll hear snatches of lyrics from previous Costello numbers Hurry Down Doomsday, Bedlam, and most obviously, Pills and Soap, which has been borrowed wholesale and re-christened Stick Out Your Tongue.  I wouldn't have been put off by hearing a whole album of such, as Costello's stuff does lend itself to The Roots' slinky, funky grooves.  Bandleader ?uestlove is featured as prominently as Costello, his tightly-wound, popping drums mixed way up in the mix, the key to the whole sound.  Everything else aside from the vocals is in the background, almost behind an aural curtain, no guitar solos or long horn breaks, the groove is gonna get ya, or nothing will at all.  Still, the devil's in the details, as the subtle instrumental blends in back are just as compelling when you do pay attention, such as the mix of synth and strings doing dramatic things on the title cut.

The devil is indeed all around this collection, as the songs are largely about the nasty plight we're in these days.  Pins, grenades, gunpowder and tripwires abound, desperation seems the mood of the day, and betrayal, Costello's old stand-by, is just a given now.  The advise here is "Wise up, when you gonna rise up?"  Costello's never been one to placate the listener, he's always best when his glass is half-empty, and as he's done since his Spike days, relishes playing the devil himself.  It's one of his best roles.  Never shy to collaborate, previous unions with country, jazz and classical folks have brought mixed results, but this time he's found his musical kin, and made as bold and rewarding statement as we've heard from anyone in years.  State of the world, and the state of music.
Posted by Bob Mersereau at 12:11 PM