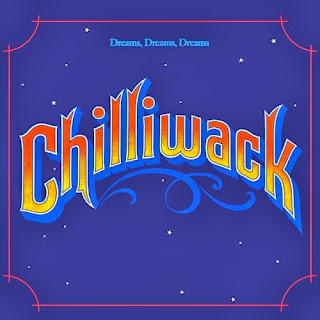 First off, huge kudos to True North music for reissuing these and several other Canadian discs from the 70's and 80's this month.  They've been out of print for years and the musicians responsible deserve to have their work available.  Many collectors and fans have been calling for these and other Can Rock favourites to be re-released; there can't be a great deal of money in it, so there's a certain labour of love involved.

These Chilliwack albums come from the late 70's, when they were on the ill-fated Mushroom label.  The B.C. band had already had one chapter of success, hitting the charts and hearts earlier in the decade with hits Crazy Talk and Lonesome Mary.  After a lull, the group got a new head of steam in '77, with the Dreams, Dreams, Dreams release.  It's arguably the best full Chilliwack album.  There were pop hits, rockers, and lots of singer Bill Henderson's signature falsetto vocals.  Fly At Night, Baby Blue and California Girl all became Canadian hits, with the first getting them into the U.S. charts a well.  It was a unique sound, with acoustic guitars taking the lead and rhythm instead of electric, but still with a full rock sound.  Add the high vocals, and it was Rush meets pop.


That success was followed up quickly later in the year with another album, Lights From The Valley.  Personnel changes were happening, with multi-instrumentalist Brian MacLeod joining, and a goal of toughening up the sound chosen.  In hindsight, it was less successful.  The best move was covering the old Sutherland Brothers cut Arms Of Mary, perfect for that sweet falsetto.


1979's Breakdown In Paradise was aptly named.  Mushroom was collapsing, and the band was shedding members.  Communication Breakdown gave them a minor hit, but the record got buried by its label's problems.  That's what makes this even more important; here we have a major Canadian group, with music that hasn't been in the public for years, and barely got released in the first place.


Chilliwack survived, and continues to this day.  There would be a hit almost immediately, their biggest yet, My Girl (Gone Gone Gone), a fine third act.  But without these albums, it's been years since we had the whole story.
Posted by Bob Mersereau at 10:29 AM