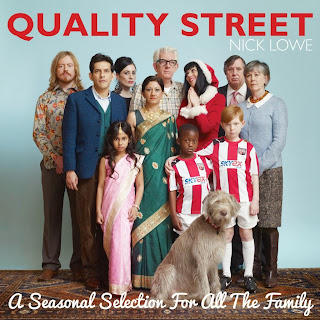 Named after those tins of assorted chocolates you get at Christmas, this is Lowe's first foray in the novelty holiday market, and I couldn't wish for a better bloke to shake up the moribund festive scene.  In a year where the big Christmas releases feature Susan Boyle, Kelly Clarkson and the bearded wonders from Duck Dynasty, thanks be for a disc you might actually want to play when folks come over or trees get trimmed.  Since he's a retro guy already, Lowe fits right in with the glory days of holiday numbers, back when Nat King Cole and Bing would entertain us with cool Yule cuts.

Being no slouch with a handy rhyme, Lowe cooked up some new, yet old-fashioned numbers for this, with his usual humour and flair.  Christmas At The Airport is the story of someone locked in the terminal after his flight was cancelled by snow ("I'm doing Santa's sleigh ride on the baggage carousel").  I Was Born In Bethlehem is a retelling of the Christmas story, except from the Saviour's point of view.  Lowe's always cheeky.  Who else would recast Silent Night as a ska number?  And it works, just great.  Hepcat jazz fans will enjoy Ron Sexsmith's cut Hooves On The Roof, written especially for the album.  And how about the traditional Rise Up Shepherd, with bongos and sitar?

There's an easy-breezy feel across the disc, which will make it a fun listen for your holiday guests.  Most of the cuts have that cheesy home organ sound you might remember from your parents' living room, and if this doesn't bring back the heyday of the Holiday, then you must be the Grinch.  "Mom's gonna get that doo-dad she's been craving, and Dad's going to get his customary tie."  Lowe's captured the spirit of the great Christmas albums of the past.