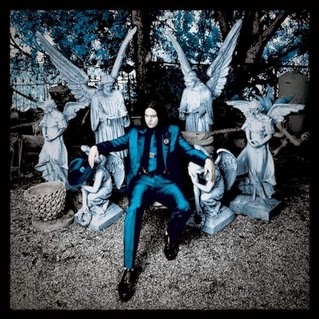 What's Jack White on about?  That's always the question with his music, his business, and especially his lyrics.  Sometimes he can be rather straightforward, as on his first true solo album, 2012's Blunderbuss, which tackled that old theme, relationships.  But he's back to more obscure writing for Lazaretto.  Or very, very quirky at least.  There are some more pointed aggrieved partner songs here, but the blues are much deeper than that here.  We're talking about God, the devil and personal demons too.

In the title track, White's debating with God (she, by the way), but gets a truly Biblical punishment, thrown into a Lazaretto, which is an old place for those with contagious diseases, as he's "born rotten, bored rotten".  In Want And Able, the characters are updates of Cain and Abel, "One is desire, the other is the means".  Yes, White is doing a lot of thinking here.  You can spend a whole lot of time examining his lyrics.

Or, you can spend a whole lot of time listening over and over again, taking in all the nuances of the production.  Once again using the two bands he introduced on Blunderbuss, all women or all men or sometimes a combo, the songs rush from style to style.  Inside each one, you're never sure what instruments can be introduced or what flourishes could be introduced.  All together, it's a lighter affair at times, with pedal steel and fiddle and even harp taking important parts.  Odd little musical moments are dropped in, such as strange vocals or clavinet parts, just like he dots his lyrics with words such as avuncular.  But the same song (That Black Licorice) also includes nods to rap in its verses, "I play dumb like Columbo and get my feelings hurt".

To top all this off, White's even come up with new ways to market the album via his Third Man Records, especially the vinyl version, the first-ever release to feature 33, 45 and 78 RPM portions on one platter.  And that includes a playable center.  Is there such a thing as too many ideas?  There's a time when cleverness overshadows high quality.  White may be close but thankfully, he's not there yet.
Posted by Bob Mersereau at 2:18 PM