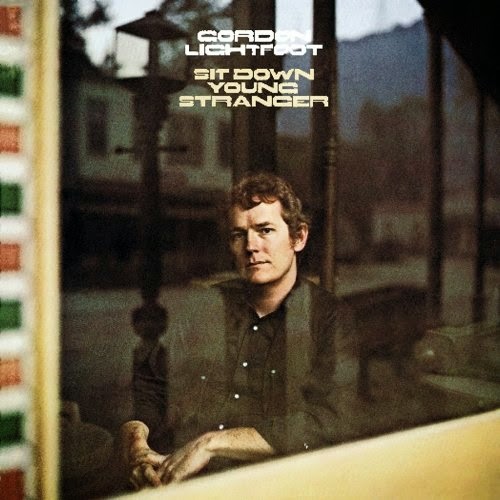 In 1970, Gordon Lightfoot put out a record that was hopefully going to be a big deal for him.  It wasn't.  It was called Sit Down Young Stranger, after the album's centerpiece song, a mild anti-Viet Nam war number that really didn't catch on.  Lightfoot had just changed record companies to the hipper Reprise label, home of Neil Young and some savvy L.A. record people, but they still didn't know quite what to do with this folk singer from Canada.  So Sit Down Young Stranger died a slow death, creeping along to sales of under a 100,000 copies, pretty quiet for a supposed star songwriter.

Then, something lucky happened.  In one of those unpredictable twists, a station in Seattle started playing another track, If You Could Read My Mind.  It took off, and Reprise put Lightfoot on a plane from Toronto to L.A. for one reason:  to convince him to allow a name change for the album, to If You Could Read My Mind.  "They said, 'will you change the album title?' And I said no," explained Lightfoot, in The Top 100 Canadian Albums.  "I said, why do you want to do it, what difference will it make? And one of the guys said, it's the difference between X and 7X.  He was telling me we'd probably sell about seven times as many albums."  Lightfoot agreed, and it made his career.  Both the album and the single were big hits, and he went on to a decade more of Top Ten success, including the #1 smash, Sundown.

There's absolutely no difference between the albums, except the title change and cover lettering.  But it is nice to have it out on vinyl again.  It was given a wide release this month, after previously coming out as a Record Store Day exclusive last year.  Lightfoot was still a rule-abiding folk singer then, with no drummer in the group, the addition of strings on If You Could Read My Mind one of the few attempts to give him a modern touch.  But he was certainly a different breed than the Greenwich Village types, now out of fashion.  As If You Could Read My Mind (the song) showed, his stories of love's dark twists were razor-sharp, beautiful in their sadness.  And as his friend Dylan later said, "Every time I hear a song of his, it's like I wish it would last forever."

Highlights on the album include his take on Kris Kristofferson's Me and Bobby McGee, recorded before Janis Joplin's hit, after Lightfoot jammed with the author in Nashville, and The Pony Man, an understand, typical Lightfoot classic.  As with most Lightfoot albums, there are key tracks, some smaller ones, but he avoided big themes.  It was as if he was saying, "Here's what I do, and what I've done lately, hope you enjoy."  We have enjoyed ever since.  Having it on vinyl is the best, a format to match the warmth of his voice.
Posted by Bob Mersereau at 2:16 PM