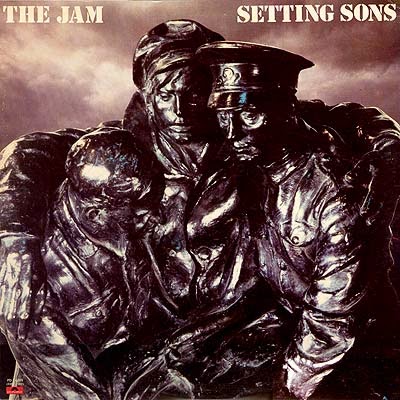 Short, sharp and successful, Settings Sons cemented The Jam's status as a hit band in England.  It was the group's fourth album in just a couple of years, and they had already outlasted all the criticism thrown at them by the usual picky English press.  Now, they didn't have to be a punk band, New Wave, Mod, whatever, they were accepted and popular, and the hit singles were adding up.  The album proper featured Eton Rifles, the group's first Top 10 release.  There was a vague concept in the tracks about three friends after the war, but it wasn't close to being a rock opera or theatre piece, even though it was pretty obvious Paul Weller owed a huge debt to both The Who and The Kinks.

This deluxe edition makes the record better, because of the add-ons.  The Jam was old-school, and liked the '60's idea of releasing separate singles from the albums, so the very good Strange Town and When You're Young, which prefaced the album, are added here.  But the big one was Going Underground, which came out just after Setting Sons, and followed the Eton Rifles single.  It went straight to #1 on the U.K. charts.  Plus, there are the corresponding fine B-sides here, including The Butterfly Children and Dreams of Children, so Disc One of this set is now value-added, with high-quality all the way.

Disc two is another good bonus, an hour-long live show from London in 1979.  Hearing the excitement build through the set, with the latest hits at the end, it sounds obvious now that The Jam were on the verge of English stardom.
Posted by Bob Mersereau at 2:04 PM