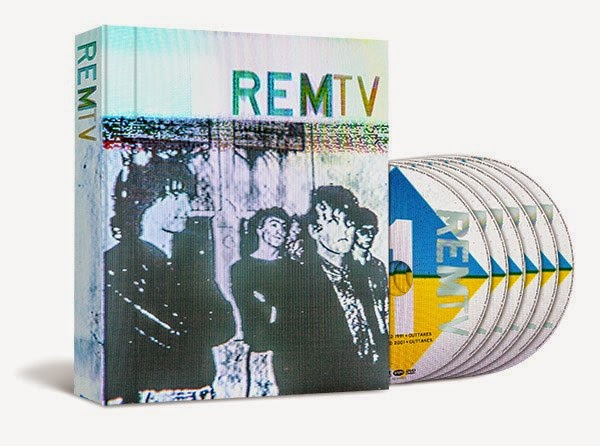 MTV loved R.E.M., and for some reason, R.E.M. was okay with that.  The band that didn't want to play the game used the channel for the greater good of the group, and somehow managed to appear constantly on the channel without losing any dignity.  Mostly, they ignored the medium and spoke to the fans, by playing live shows.  Also, Stipe loved the film-making side, so the video channel was another part of the art to him, even if he had to endure the interviews.  Surprisingly, even those went down well, with the band members refusing to talk down to the medium, and always answering questions honestly.  They tried to be anti-rock stars, even as they continued to grow more and more famous.

With all those appearances over the years, this huge box has been compiled, a six-DVD set, each one running between two and three hours long.  The bulk of it is live performance, various concert specials aired by the network, and none of the previous R.E.M. concert material has been duplicated (save for the Unplugged sets, recently earlier this year on CD).  Sadly, not much of this comes from the '80's, when they were raw and growing, but there's no use crying over spilled milk, enjoy what you get.

Disc one captures the two Unplugged sessions, in 1991 and 2001, R.E.M. being the only band to be granted two complete shows on the influential series.  With these things huge sellers for Clapton, Nirvana, etc., it's surprising the band didn't put them out before, jewels that they are.  The 1991 set especially was important, as the group had refused to tour for the Out Of Time album, which then became their biggest ever.  They were simply burned out on the touring cycle, and Buck had wanted to make acoustic music, so TV was perfect for his mandolin, and the soft and pop songs that made up the album.  That mandolin opening to Losing My Religion was a crowd thriller, and the band went back into its catalogue for softer cuts that made a great impact in the acoustic format, including Fall On Me and Swan Swan H.  The 2001 appearance feels like a statement is being made to the MTV viewers, which would include much of the fan club.  The band had nearly broken up when Bill Berry had left and the recording of the album Up went poorly, but now they had a new album (Reveal) and were determined to show they were still a powerful unit.  Sitting alongside classic cuts So. Central Rain and The One I Love, new songs such as All The Way To Reno and Imitation Of Life did offer a new kind of energy, Stipe especially now no longer the reticent front man.  Nicely, both appearances include a bevy of outtakes, adding significantly to the show lengths.

Disc two is an interesting hodgepodge of appearances, including 1998's VH1 Storytellers, with a few choice Stipe comments, and again, a bunch of outtakes.  Then we do get to go back to the early days of the band, with a couple of (sadly) short appearances, a mini-documentary on The Cutting Edge, which includes some partial versions of tracks, and another song called Livewire which does have two full cuts, So. Central Rain and Carnival Of Sorts.  Then come some one-off live cuts, from various MTV award shows and such, all worthy.  The band's induction into the Rock And Roll Hall Of Fame in 2007 appears, with them doing three cuts for the crowd, with Bill Berry back in the drum stool for the night.

The next three discs feature live concerts broadcast between the years 1995 - 2008, either in the U.S. or in Europe.  During this time, the long slump that led to their ultimate demise started to take hold.  While the excitement over new R.E.M. albums dwindled, especially in North America, in Europe they continued to be a major concert draw, and its very interesting to watch how great these shows are.  In places such as Athens (Greece) and Milan, there was little of the snobbery that greated the new albums, not many calls for the old indie-80's songs.  This was a crowd still excited by Losing My Religion, still in love with Man On The Moon, and enjoying (quite excellent) later material such as Electrolite, What's The Frequency, Kenneth? and Supernatural Superserious.  There's a whole post-Berry career that will have to be reconsidered at some point, and this DVD set will be a valuable research tool, plus a darn fine viewing every so often.  Disc six is an interesting career documentary running over two hours that MTV put together, using the many interviews done over the years.  What strikes you most is how refreshingly decent they all seem, and I think they can hold their heads up and know they did it all as best they could.
Posted by Bob Mersereau at 6:22 PM