MUSIC REVIEW OF THE DAY: THE MOODY BLUES - THE POLYDOR YEARS 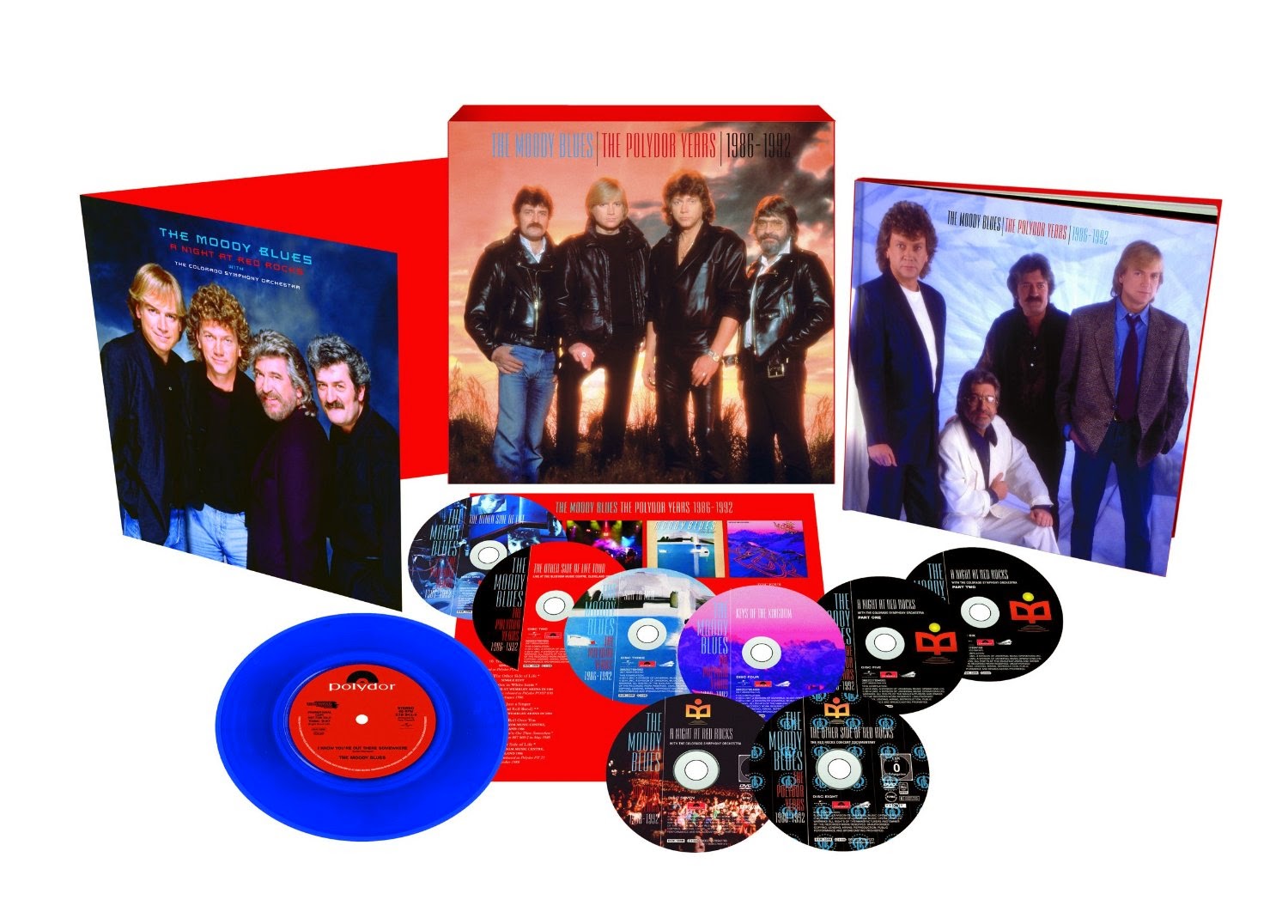 The Moody Blues are considered a classic rock band for the hits made in the '60's, especially Nights In White Satin.  But they were just as successful in the '80's, with a string of albums that surprisingly kept giving them hits and selling in big numbers world-wide.  Even as a touring group, the band filled all the sheds of the day.  Much of that has been collected here in a big box called The Polydor Years.  The group made just three studio albums for that imprint from 1986 to 1992, but as with these all-inclusive sets, they've managed to stretch that to six CD's and two DVD's.  Although it should be noted that four of the discs are from live shows, and one is a DVD repeat of a concert featured in the CD's.

The band's '80's comeback started with the album Long Distance Voyageur, which reached #1 in both Canada and the U.S.  It featured the hits The Voice and Gemini Dream, and saw the group embrace a new, synth-heavy 80's sound.  Next came The Present in 1983, which failed to come anywhere close the success of its predecessor.  1986 saw them switch to Polydor, and retool once again.  The focus was now even stronger on the synth, with the group's orchestral past buried.  They were now closer to Simple Minds than the British prog groups of the '70's, or the R'n'B of the '60's.  It was quite a tale of perseverance and adaptability.

The first album featured here is The Other Side Of Life, which took them back to the Top Ten, and includes the hit Your Wildest Dreams.  The group was now doing better in North America than in Europe, and found themselves in an enviable position; they had status as a heritage band, with a collection of songs to win over concert crowds, but also lots of buzz for their recent albums.  They had a bit of ELO excitement to them on disc, and still offered up nice vocal numbers such as the title cut of the album.  But it there were clunkers in the running order as well, such as Rock 'n' Roll All Over You, with its KISS-worthy lyric on top of a lifeless attempt at a fist-pumper.

The second studio album was 1988's Sur La Mer, continuing the trick of offering up a smooth hit, somewhere between a power ballad and a synthpop dance track.  In this case it was I Know You're Out There Somewhere, again a good showing but there wasn't much to back it up on the rest of the album.  No More Lies, the follow-up, only scored on adult contemporary radio, and the album barely made the Top 40.  1991's Keys To The Kingdom saw the group lay off the synths for the most part, and flute player Ray Thomas even got to trot out one of his numbers, recalling the old days.  There were no hits, although Bless the Wings (That Bring You Back) was a nice mellow number, and the album barely made the Top 100.

Efforts then switched to greatest hits albums and live concerts, which was pretty darn lucrative at least.  Officially released in 1993, A Night At Red Rocks was a special show made at the titular Colorado venue, with an orchestra among the rocks and fires, and a celebration of the iconic Days of Future Passed album.  There was an orchestral overture, lots of old faves such as Tuesday Afternoon and Question, the recent hits, and of course, Nights in White Satin.  We get an expanded version of the concert here, filling up a full two CD's, plus another DVD of an edited-for-broadcast set, with almost all the cuts.  If that isn't enough, another DVD has a full documentary on the show, a career highlight for the band, but perhaps more than enough of the same show, as half this box is centered around it, on the two CD's and two DVD's.

A final CD here is a live show from 1986, on The Other Side Of Life tour, in the far less-impressive locale of Cleveland.  Really, it's much the same set list, with the old hits mixed around the new ones, but much less fussy without the orchestra.  I prefer this one, it's more meat-and-potatoes, less chat about Our Beloved Royal '60's Hit Album (okay, those are my words, but they are a bit British and pompous on stage). It's a never-before released show, although some of the cuts were included as B-sides of singles around then, and show up on the other CD's.  There are a few more odds and ends thrown in to make the discs last over an hour each, including live cuts, B-sides and BBC sessions, all of worth.  It's a strong package too, with a hard-bound book, lots of colour and strong visuals.  These sets work best for huge fans, especially given the price tag and the repeating tracks from albums to live discs, but they also have some value for any casual fan and collector, for the knowledge and history presented.
Posted by Bob Mersereau at 3:03 PM