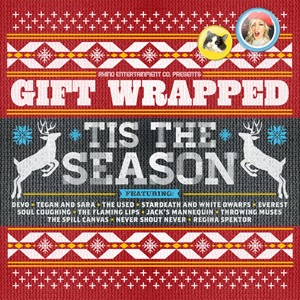 Now this is what an alternative Christmas collection should be:  Not the same old same old, but new, varied, often irreverent, listenable and with at least some tunes of higher grade.  Oh, and on vinyl is a nice bonus as well.  Put together by the fine folks at reissue specialists Rhino Records, it features a mixed bag of folks, from the twisted veterans Devo to Calgary hit makers Tegan and Sara to merry pranksters The Flaming Lips.

Some do play it straight, or at least give us a normal song.  Regina Spektor offers the somewhat dark December, no tree-trimming number, and The Spill Canvas do a nearly-normal It Came Upon A Midnight Clear.  The Flaming Lips, you'd think, would be vicious, but instead give us a hopeful, and upbeat A Change At Christmas (Say It Isn't So).  Devo, of course, do something to point out the de-evolution of society, with Merry Something To You, the irony of conflicting religious beliefs leaving us mired in political correctness.  It's Tegan and Sara who leave us laughing, with their take on The Chipmunk Song, speeding up their voices and playing the roles, Sara as Alvin.  Most bizarre award goes to Soul Coughing, for singing Suzy Snowflake.  For those of you sick of the Boney M Christmas album, and a little cynical about the whole thing, try this.
Posted by Bob Mersereau at 2:21 PM