MUSIC REVIEW OF THE DAY: DANIEL ROMANO - IF I'VE ONLY ONE TIME ASKIN' 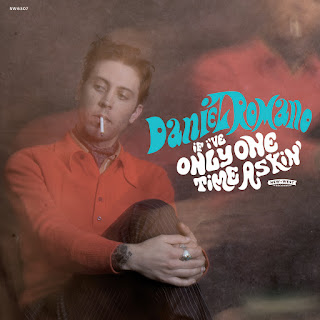 There is more, and far better country music on this album than anything being made in Nashville these days, but you can't call it a country album.  That's even though it is the real stuff, many of the tracks the equal of something made at Owen Bradley's Quonset Hut studio, or maybe a George Jones weeper from the '60's.  Then there are his philosophical numbers, the wise and deep numbers Willie has given us so often.  But no, there are enough moments here to remind us that Romano has lots of broad musical knowledge, rich talent across the board, and an indie background and attitude from his past in City and Colour and Attack In Black.

Romano calls the music Mosey, creating his own term to suggest he will at any time mosey across any genre rules.  The biggest examples of this here are the linking bits that connect each track here.  So while you have a straight country song for three minutes, then you get a completely unrelated bit of a string section, a left-over bass line, or a small chunk of what could have been a soundtrack to a blacksploitation film, with backing singers adding "mosey", name-checking his personal musical principle.

Romano has perfected the classic couplet.  From Learning To Do Without Me, we get "See the girl at the table sipping on wine/Would you believe that once she was mine?" It's full of heart-crushing moments, almost all of them featuring that old-school Nashville archetype, the guy who screwed up and is now paying the price in lost love.  Even when he breaks the mood on the upbeat, somewhat comic Two Word Joe, we find out he can only utter two words at a time because he lost at love twice and basically went stupid.

Not only has Romano learned to write 'em, they sound just as impressive and classic too.  That's quite the feat itself, as it was done in his home studio, with few other musicians.  There's one big track though, the opener I'm Gonna Teach You.  It features a large orchestra sound, complete with kettle drum, in a beautiful arrangement.  It's dramatic rather than simply sweetened with strings, and I'd love to hear more cuts in that style from him.  Elsewhere, accordion, peddle steel and Cramer-style piano add lots to the tracks, a tremendous set of emotional and musical achievement.
Posted by Bob Mersereau at 3:18 PM