MUSIC REVIEW OF THE DAY: HEAVEN ADORES YOU - THE LIFE & MUSIC OF ELLIOT SMITH 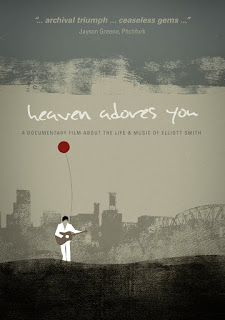 If you're looking for superstars rushing out to say how great Smith was, in the typical deceased rock star bio, this ain't it. You'd have to be a pretty big music fan to recognize more than a couple of the names here. Instead, these are the real friends, old colleagues from Smith's indie days, and back-stage people who really knew and meant something to the fated singer-songwriter.


The basic story is pretty much known. He had a tough time dealing with the star system he found himself in, after the fluke Oscar nomination for his work on Good Will Hunting. Then he got this rep as a really depressed guy with the saddest lyrics and sound ever, and eventually got into drugs and took his own live. What the filmmakers have done, and very successfully, is show that tiny little snapshots of people's lives are never the whole story, and in this case, not even close to it.


Bit by bit, we find out the surprises. Smith was mostly a punk rocker instead of the introspective acoustic dude we mostly know, until his songwriting simply overtook the limits of the genre. He never lost that indie, D.I.Y. spirit. He was far from a quiet, reclusive, mopey type. He was actually the leader of the Portland, Oregon music scene in the '90's, an obvious talent that couldn't stay locked in one town. He was a fun, interesting guy, with lots of friends. He himself admitted he probably wasn't cut out for attention, and didn't even realize the level of his talent, but mostly he was humble, not flummoxed by the spotlight. He certainly saw the irony of his appearance at the Oscars, the supreme joke of being given advice on nerves from Celine Dion.


The film doesn't try to say what might have helped Smith in his battle. He'd actually cleaned himself up at the time of his death, and had mended a few fences. There wasn't any great villain in the story, no evil record company exploiting a troubled soul. He went willingly, always interested in having people enjoy his music. The film lets you come away with a better description of Smith, and a deeper appreciation of his talent. It's a sad story, but now, the more people who get to hear him the better, and this will only help.
Posted by Bob Mersereau at 9:28 PM