MUSIC REVIEW OF THE DAY: IRIS DEMENT - THE TRACKLESS WOODS 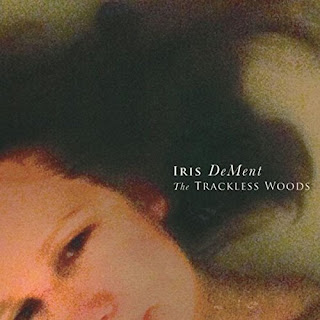 I've said it before, it's no secret, I have Iris Dementia.  The not-too prolific singer and writer has been making some of the most emotionally powerful roots music over the last 20-plus years, but often with huge breaks in between albums, a couple of eight year gaps in there.  It's only been three years since the last, Sing The Delta, so that's a good sign.

Often highly personal, and known for laying bare aspects of her life, and themes such as small-town and religious upbringing, this time her muse was a surprising choice, but one that becomes more obvious as the back story is explained.  Dement found some of the poems of a 20th century Russian writer in a book given to her by a friend.  Anna Akhmatova suffered until the turbulence of revolution, two World Wars and Communist persecution during her life.  She wrote about the terror under Stalin that saw many of her contemporaries banished to Gulags or murdered, and she herself was censored and condemned, but somehow survived and kept writing and witnessing.  Much of her work remained unpublished until after her death in 1966.

Dement's tie to the material comes from her daughter.  She and her husband (singer-songwriter Greg Brown) adopted a girl from Siberia in 2005, and Dement decided this would be part of her efforts to help her daughter know more about her original culture.

It's easy to understand Dement's artistic connection as well.  As translated, Anna Akhmatova's poetry is plain-spoken, powerful and uses a slightly-antiquated vocabulary.  It feels like old church language, perfect for Dement, who has often used that form, even recording an album of hymns.  While it's a strange mix on paper, this somewhat radical Russian intellectual, and the voice of rural, conservative, Christian Americana, Dement sounds as if she was working her life to this set of songs.

Recording sparsely over a few days in her own living room, the main instrument is Dement's parlor piano and of course, her distinctive, Appalachian-inspired voice.  It is a collection of mostly sadness, given the topics, but it's broken up a bit by Dement's way with melodies, and ear for knowing when a little bit of honky-tonk could spice up a dour Russian tale.  And when Dement sings Anna Akhmatova's words about her country, which she refused to leave despite all its many ills and dangers, you realize it's the poet's spirit that is the connection: "I knew it is all mine, and nothing can divide us, it is my soul, it is my body too."  This is a slow-builder, but one that keeps delivering more each listen.
Posted by Bob Mersereau at 2:30 PM