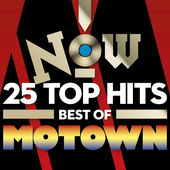 There are two thousand Motown compilations available, why do we need another? There's a good reason. It's to keep the catalog fresh, something new every few months in the store. And that's because month after month, year after year, new generations discover and quickly fall in love with the classic sounds. Fifty years later, these songs still pack the same punch, up there with The Beatles, Stones, Beach Boys and few others.


When you do a Motown best-of, you have about 200 cuts you can choose from, easy. You can't go too heavy on one or two artists, so it gets pretty hard to choose one Stevie Wonder or Marvin Gaye or Supremes or Four Tops, but that's what's called for. This does a pretty good job of cherry-picking the best, offering 25 cuts over two CD's. Wisely, they keep it heavily in the '60's, with a few good '70's numbers, and only one dubious choice, Rockwell's Somebody's Watching Me.


There are a few lesser-known cuts, but still big hits of the day: Rare Earth's I Just Want To Celebrate, Canadian Bobby Taylor & the Vancouvers' Does Your Mama Know About Me, and even a real surprise, Barbara McNair's Here I Am Baby. While none of the rest of the tracks is a shocker, overall, you can tell they decided to pick a few less common ones. Uptight by Stevie Wonder rather than Superstition or Fingertips Pt. 2 or Ma Cherie Amour. Marvin's Mercy Mercy Me (The Ecology) instead of What's Going On or I Heard It Through The Grapevine. The Temptations' Ball Of Confusion instead of My Girl. So this can appeal to the typical fan who already has one Motown set, and maybe The Big Chill soundtrack too.


Anyway, it's hard to complain about this, it's great from start to finish, aside from Rockwell, who was the boss's son, so that's why he shows up so much. And I can happily do without The Commodores, but that's just me. You get Smokey's Tears Of A Clown, The Contours and Do You Love Me, Barrett Strong's Money, it doesn't get any better.
Posted by Bob Mersereau at 5:33 PM