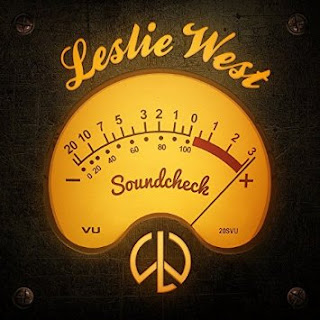 Classic hard rock fans will get a kick out of the fact Leslie West is still sounding bigger and badder than ever. The Great Fatsby, the leader of Mountain, was one of the true heavyweight guitar players of the late '60's/early '70's, renowned for the hit Mississippi Queen, his massive sound and wicked vibrato. West counted the very best among his friends and admirers, including Hendrix, Pete Townshend (he played on the first Who's Next sessions) and Johnny Winter. Then there's the little supergroup he formed with Jack Bruce and Corky Laing, and apparently there are still some ears ringing from that band's gigs back in the day.


West has been on a recording role for the last few years, back in the saddle with the hard stuff, some blues and an occasional acoustic jam. There's no shortage of friends ready to pitch in, including Brian May of Queen, Peter Frampton, Mussel Shoals swamper David Hood on bass and former Domino Bobby Whitlock on organ. Even the late Bruce appears, as West found an old live tape of them playing a crushing version of Spoonful, in the Cream mode.


There's a couple of okay originals, but mostly West relies on covers, to which he can apply his famous signature sound, and this truly is a guitar player's album. It's not about fast, it's about tone, and finding new ways to present classics. There's everything from People Get Ready to Tracy Chapman's Give Me One Reason to a minor-key take on Your Are My Sunshine. As a tribute to his pal Howard Stern, there's the refreshing acoustic piece A Stern Warning.


West's no great vocalist, so the album falters a bit in that regard. Loud, he tries for the same space as AC/DC's Brian Johnson, but without the dynamics. Still, pretty good for a 70-year old. The best track doesn't even have him on it, singing or playing. Instead, he hands a solo cut over to his bass player, Rev Jones, who does a one-man, one-take version of Eleanor Rigby that's kind of mind-blowing. That's a pretty humble move.
Posted by Bob Mersereau at 7:45 PM