MUSIC REVIEW OF THE DAY: DEXYS - LET THE RECORD SHOW: DEXYS DO IRISH AND COUNTRY SOUL 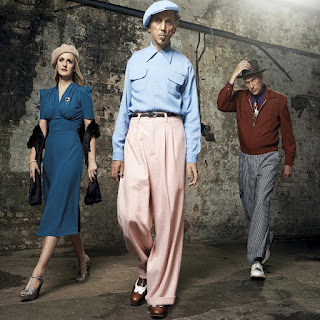 This ranks very high on the WTF scale, but Dexys frontman Kevin Rowland has been setting the bar there for decades. His definition of Irish and country soul is pretty broad, and I'd probably give it a different name, more like old Irish standards and a bunch of unrelated covers. How else can you explain an album that includes anything from the traditional weeper I'll Take You Home Again, Kathleen, recorded by everyone from Elvis to Merv Griffin, and the equally sappy How Do I Live, the mega-hit by LeAnn Rimes?


In case you think Rowland has pumped these numbers up with his Celtic soul horns of old, or even the loyal Big Jim Sullivan's trombone, nope. The songs are taken at normal pace, with lots of violin and other strings. The only soft song that gets a bit of a beat added is Joni Mitchell's Both Sides Now (!), with prominent drums and a slight disco production. Hey, that's one of the more normal moments in a set that includes The Platters' Smoke Gets In Your Eyes, the mildly funky Grazing In The Grass, and The Bee Gees' To Love Somebody, mixed in with Irish numbers such as Carrickfergus and Curragh of Kildare.


Honestly, I'm baffled. It's such a mixed bag of weirdness, I don't know quite who to recommend this to, except that I actually like it, with all his quirks and corniness. I think Kevin Rowland thinks he's much, much better than he really is, but his force of personality and determination can make more than a few people see past his weaknesses and oddities. His voice, which should be the most potent weapon for such a collection, is not great. It's different, but he oversings when he thinks he's emoting, and it's not particularly pleasant. But it's different, and that's his greatest appeal. Yeah, this is different alright.
Posted by Bob Mersereau at 9:14 PM