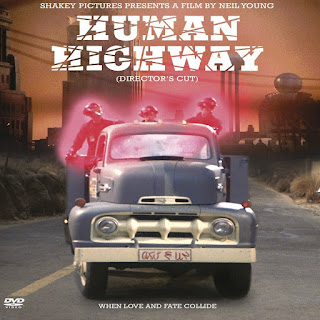 I'd always heard it was pretty crazy, and Neil Young's film Human Highway certainly lives up to that billing. But given his very spotty film making career and life-long history of odd ideas at times, the 80-minute movie was actually watchable, even in its weirdness. Perhaps that's because he did attract some professionals to the project, even though they were some of Hollywood's misfits: Dean Stockwell helped Young direct, and it's certainly better than the usual Bernard Shakey work (Young's preferred name for his movie work). Stockwell also joined the cast, along with Dennis Hopper, Sally Kirkland, Russ Tamblyn, and most interestingly, everyone in Devo.


Young is also the star, and does a pretty good job as the funny character Lionel, a simple, goofy mechanic at a 1950s-styled gas station and diner. Although we never get the actual year in which this fantasy is set, it's filled with Young's favourite things, including old cars, wooden Indians, a juke box and early rock 'n' roll. Yet it's also the last day on Earth, as a nuclear war is about to start. The Devo guys all work at the local nuclear plant, and glow red with radiation, dropping barrels of waste all over the area, basically predating Homer Simpson and the gang by several years.


Young took four years to make the film, blowing a ton of his money doing so, and it spans some pretty important times for him. The collaboration with Devo led to the whole Rust Never Sleeps concept, and you can see the first version of the song here, sung by the group's mascot Booji Boy with Young on nutso guitar. Devo also provides the film's theme song, Worried Man Blues, while Young finished up the project by adding lots of the music that filled his Trans album, and the vocodor vocals certainly fit in here.


The plot breaks down about two-thirds of the way through, as Young goes into a very long dream sequence, which features the big jam with Devo. That is pretty cool though, so by that point I was happy to give up on any kind of logical script. The bombs fall, they all die and sing and dance their way to heaven. I've seen worse endings in Mel Brooks films.


Young has wisely kept this tough to find since its 1982 release, when it was trashed and only made it to a handful of screens. There was a limited release on VHS, but now perhaps enough time has gone by (and other worse projects too) that fans can appreciate the best moments and performances of both Young and Devo, and even some of their wacky acting too. It's been cleaned up, and now features the re-edited director's cut, plus state-of-the-art Blu-ray and 5.1 stuff, so this is the best it can be.
Posted by Bob Mersereau at 11:06 PM