MUSIC REVIEW OF THE DAY: WILLIAM BELL - THIS IS WHERE I LIVE 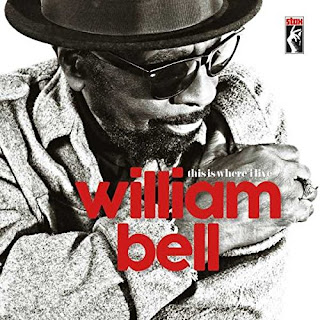 Although he wasn't among the biggest stars of the Stax Records label from Memphis (Otis, Sam & Dave, Booker T, etc.), big fans of the label have always placed Bell on the same level as a performer and writer. His best-known number is considered a soul classic, You Don't Miss Your Water, and he co-wrote the Albert King blues hit Born Under A Bad Sign, included here.


But this isn't a cash-in on the old days for a faded star. Instead, Bell has simply been doing what he does in the time since, fronting his own label and not chasing the spotlight. What's different is a reunion with the rebooted Stax label, and a great new partner in writer/producer John Leventhal (Rosanne Cash, Shawn Colvin). Yes, this is a soul album, but not a 60's Stax one, it's not the horns-and-hits formula. It's more of a gentler, country-soul album, focused on his still-supple voice and keen lyric sense.


Working mostly with Leventhal, as well as Marc "Walking In Memphis" Cohn, there was a great deal of care put into the songwriting, with some classic soul metaphors and lines: "The house always wins," "things you can't remember I'm still trying to forget," Phrases like that ring true and sit wonderfully as the big moments in choruses. There's also a funky little number, one of those great story-songs about the South, Mississippi-Arkansas Bridge, about meeting a mystery woman in the blues clubs, before having to rush back across at the end of the night. This isn't a master re-discovered, it's a master still at work.
Posted by Bob Mersereau at 3:07 PM