MUSIC REVIEW OF THE DAY: GLENN MCFARLANE - MUSIC AND FRIENDS 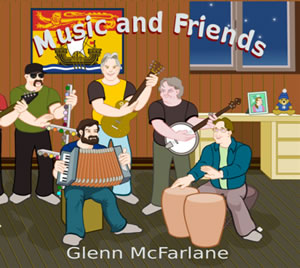 Three years ago, an Ontario musician decided it was time to return to his roots. For Glenn McFarlane, that meant going home, literally. While he's a staple of the roots scene in Brampton, McFarlane had grown up in Charlotte County, New Brunswick, and had not lost that connection. While he had returned for family gatherings in the past, that time he decided to make his journey back a musical trip too, called the Prodigal Son(g)s Tour.


Fast-forward to this summer, and McFarlane is doing it again. He's booked a full series of shows in his home province, this time bringing even more New Brunswick-inspired music with him. McFarlane's latest album is called Music and Friends, and includes, among other offerings, some songs about the province, and even one that came out of that last tour, called The Prodigal Son(g)s Tour. IT tells the tale of the journey, from monumental rain storms which couldn't keep the music from happening, to being able to play the places that meant so much to his family. It's pretty much all right there on the cover of the album, with the New Brunswick flag hanging proudly.


McFarlane's very much a people's folk singer, with the title cut pretty much explaining his philosphy ("When we're together the fun never ends/So here's a toast to music and friends"). Let's Talk About New Brunswick is about as big a shout-out to the great places of the province as has ever been written, worthy of another New Brunswick son, Stompin' Tom. There are lots of songs that work for any province too, including the self-explanatory It's a Beautiful Day for a Beer, and Middle Aged and Overweight.


Here's a list of McFarlane's NB shows for this year:

Posted by Bob Mersereau at 7:38 AM